You are here: Home › Global Focus › Us War Veteran Strides Past 100 With Honour

US war veteran strides past 100 with honour US war veteran strides past 100 with honour

Mickey Nelson out for a walk on his way to 100 miles to raise $US100,000 for The Salvation to celebrate his 100th birthday. Photos: Craig Dirkes*

To celebrate his 100th birthday, he has set himself a goal of walking 100 miles over the American summer to raise $100,000 for The Salvation Army.

He has achieved two of the three goals – celebrating his 100th birthday in Clarks Grove, Minnesota, on 27 June, and accumulating $US105,000 in donations to his online fundraising page – but he has walked 75 miles and intends to reach 100 by continuing to walk a few miles each day around streets of his hometown before the end of summer.

“My daughters challenged me to raise money to feed the hungry during the COVID-19 crisis,” Mickey said. “I am walking each day with a cumulative goal of 100 miles. We chose The Salvation Army as our fundraising avenue and believe they are doing the most good.”

Dan Fury, The Salvation Army US Northern Division Public Relations and Communications Director, said Mickey’s story has been “quite a phenomenon”. “He’s a fixture in Clarks Grove; often seen walking down Main Street, past the hardware store and the post office and The Salvation Army clothing donation box,” Dan said. “Just about everybody in town knows Mickey and waves hello while he’s out walking. In fact, he still lives in the house in which he was born in 1920. Even when he hits the goal, I know he’ll continue to walk.”

Mickey said when he started out he thought he would raise about $5000, but a flurry of donations followed after his story aired in May. National coverage came next with each story bringing additional attention to his quest.

The attention paid Mickey has been good for The Salvation Army, where Mickey’s fundraiser is being directed to provide food assistance during COVID-19.

Don LaMar, Director of Ministry at the Army’s West 7th Street Corps in St Paul, Minneapolis, expressed his gratitude. “We’ve gone from doing 15-20 food boxes a day (pre-COVID-19) to now averaging well over 300,” he said. “Some days we’ve been as high as 700 or more. We wouldn’t be able to do it without partners like Mickey.” 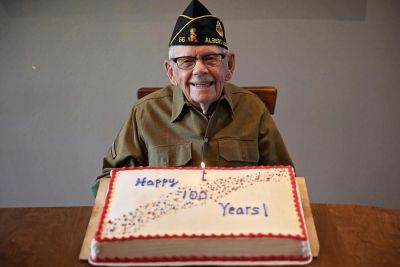 Heart for the hungry

Mickey said he remembered the tough days of the Great Depression of the early 1930s, which he said were not too dissimilar to what was happening in the coronavirus pandemic. Those memories, he said, were part of the reason he started his walk.

“My folks were frugal, grew and preserved fruits and vegetables and there were opportunities to hunt and fish (during the Depression),” Mickey said. “Today, many people are going hungry in our area and all across the USA.

“Life is a lot different from when I was young – many people live in apartments and have no garden or ways to get food. Some are single parents with young children. This is heartbreaking to think about in a great country like ours. The Salvation Army is helping people every day. I remember the breadlines in those days of the Depression. They were lining up for something to eat. It left a mark on me that people needed food.”

Mickey, who attends FBC (Faith Brings Change) Church in Clarks Grove, recently received $US1500 in a donation separate from his online fundraising page. So he walked from home to the local Salvation Army a few miles down the road and handed it over, leaving instructions that the money was to go to food “because I always had food on the table in my life”. He then walked home, adding a few more miles to his goal.