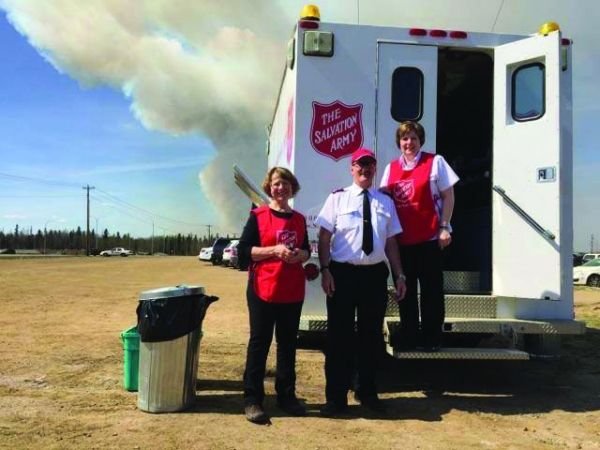 Salvation Army emergency services personnel handed out cold drinks and snacks to Fort McMurray residents who were affected by the bushfires.

A major emergency response was deployed by The Salvation Army in Alberta, Canada, early last month following bushfires that led to the complete evacuation of the city of Fort McMurray – affecting nearly 90,000 residents and workers. The Salvation Army sent four community response vehicles to the scene to support more than 1100 firefighters, police officers and other emergency personnel with the provision of cold drinks, snacks and full meals.

The area affected by the fires covered some 850sq km and led to at least 1600 buildings being destroyed. The Salvation Army’s established and well-rehearsed emergency protocols ensured that they were ready to mobilise quickly after the fires began. A dedicated disaster response was established at the Alberta and Northern Territories Divisional Headquarters in Edmonton in order to coordinate The Salvation Army’s work.

Before the fires intensified and led to a citywide evacuation of Fort McMurray, The Salvation Army was providing food and water, clothing and hygiene packages to displaced residents. All Salvation Army officers and staff in Fort McMurray were safely evacuated, and additional personnel were drafted in from elsewhere in Canada.