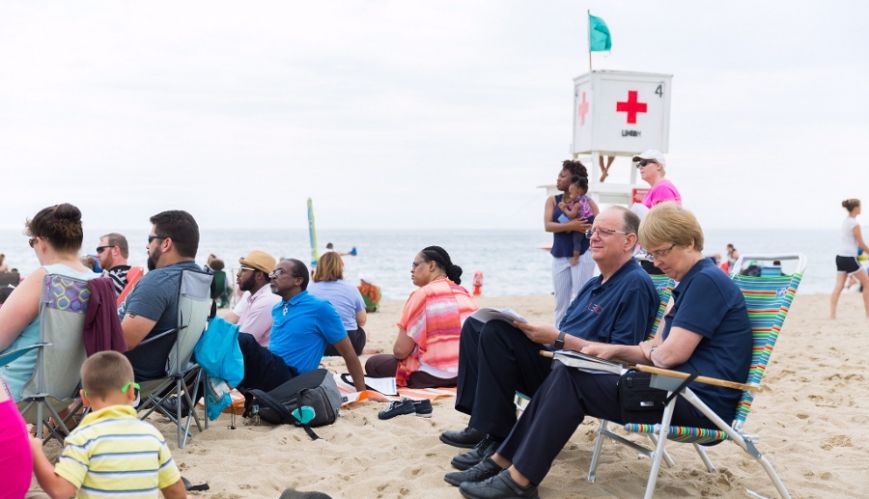 General and Commissioner Cox participate in Bible study on the beach during the Old Orchard Beach Camp meetings in Maine.

General André Cox and Commissioner Silvia Cox lifted the hearts and challenged the minds of many Salvationists and friends who attended the USA Eastern Territory’s Old Orchard Beach Camp Meetings in Maine.

The Salvation Army has held camp meetings on the site since 1885, only five years after beginning its ministry in the USA. From meetings in the Seaside Pavilion – a state-of-the-art theatre built in 1998 – to Bible studies and children’s activities, to marching through the streets and enjoying the festivities at the pier, The Salvation Army’s international leaders spiritually touched lives and had great fun in the process.

A highlight of each meeting was the sight of seekers kneeling at the foot of the pavilion stage in response to the prompting of the Holy Spirit. Some people gathered at mercy seats, others stood arm-in-arm in prayer.

In the packed pavilion, the General and Commissioner Cox installed Commissioners William and Lorraine Bamford as new leaders of the USA Eastern Territory, as territorial commander and president of women's ministries respectively. The General also recognised Colonel Kenneth Johnson Jr as the new chief secretary and Colonel Paula Johnson as territorial secretary for women’s ministries.

During his time at the camp meetings, the General delivered many thoughtful and sobering messages. His spontaneous sense of humour added levity to the gravity of his words. He challenged Salvationists to appreciate their history and to contemplate their future, but to also be fully engaged in the present. He called on them to face the problems of today’s “crazy” world with great empathy, integrity and courage.

When he asked: “Who will answer the call?” many people rose from their seats and stood with him on the platform. The new territorial commander also joined the responders on the platform.

On Sunday, Salvationists stepped up their presence at the Old Orchard Beach Pier with a march of witness led by the General and Commissioner Cox. The march, witnessed by hundreds of onlookers, culminated with a NYSB and territorial songsters concert on stage. At its conclusion, the crowd received a heartfelt invitation to attend the pavilion festivities.

That evening at the pavilion, Commissioner Cox shared her testimony. She encouraged parents to be the teachers of the Word of God at home to their children. “You don’t need much to start a Bible lesson in your own home,” she said. “Simply open a Bible and open your heart.”

On Monday evening, the General acknowledged the service of Ronald Waiksnoris, who is retiring as NYSB bandmaster and territorial music secretary. The General thanked Bandmaster Waiksnoris for his 41 years of service and the 'legacy' he leaves behind.