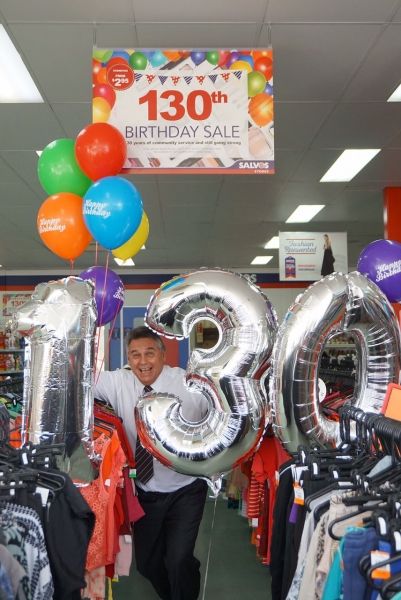 Salvos Stores is celebrating 130 years of helping struggling families and individuals through the millions of dollars raised by their stores for The Salvation Army.

“We are very missional. We continually attempt to assist people from all walks of life and see transformation,” said Salvos Stores General Manager, Neville Barrett, in reference to the policy that all profits raised from sales of pre-loved and recycled furniture, clothing and goods goes towards running vital Salvation Army programs.

Stores across the Australia Eastern Territory will celebrate the 130-year milestone in a variety of ways leading up to Christmas. Each store is being decorated with silver balloons and individual stores are being encouraged to host birthday events for their communities.

An e-catalogue, featuring new items and Christmas products, including a range of cosmetics, is being released, and there is 50 per cent off all pre-loved clothing being offered today only.

“Salvos Stores staff and volunteers ... they’ve got their party mood going on,” said Neville. “The people that have come well before us, if they were here today, they’d be well proud of the organisation that now exists as Salvos Stores.”

Recycling still remains close to Salvos Stores’ heart as they divert 15,000 tonnes of clothing and households items per year from landfill.

As part of their anniversary celebrations, Salvos Stores is honouring the 2520 active volunteers across their 100 Salvos Stores at volunteer recognition events. In particular, Neville says he is proud to have nine Salvos Stores managers who came to work at their stores via the Work for the Dole initiative – a partnership program with the Army’s Employment Plus.

In the future, Salvos Stores management is eager to increase funding for the work of The Salvation Army’s programs through their shop sales, help increase sales at local Army Family Stores and continue to spread the love of Christ at each premises.

“Often we are the only face of the Army people get to see. So we want to ensure we represent the Army in its true ethos and the love we have for God is truly obvious to everyone,” said Neville.

Go to salvosstores.salvos.org.au or phone 13 SALVOS (13 72 58) for further information about shopping and donating to Salvos Stores.