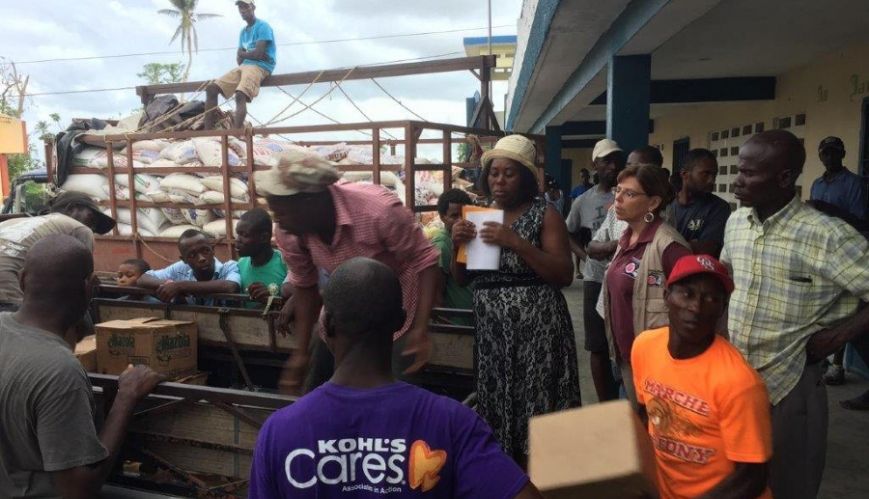 Food supplies are unloaded as part of the emergency assistance being offered by The Salvation Army in Haiti.

When Hurricane Matthew swept across the Caribbean in early October, it caused huge devastation across Haiti – particularly in the south of the country.

Around 2.1 million people were affected, with 1.4 million people needing humanitarian assistance, including more than 800,000 who required urgent food assistance. The Salvation Army in Haiti reacted quickly, providing cooked meals for several days for 800 people in emergency shelters. This was quickly followed by the provision of rice, beans, oil and corn to approximately 4000 people.

The hurricane was followed by another disaster – a cholera outbreak that has already spread to more than 5800 people. A massive vaccination operation is underway, with the Ministry of Health seeking partners for a cholera prevention program. The Salvation Army’s Bethel clinic in Font-des-Negres is ideally positioned for such a task, having gained experience during the last cholera outbreak.

Staff at the clinic are working on an extensive community awareness program, which involves training 30 community health workers who will work in 60 different locations. Part of their responsibilities will be to share information and instruction regarding hygiene, cleaning and how to deal with any suspected cholera case. Prevention kits will be distributed to 2500 of the most vulnerable households. The next phase will be to construct and operate a cholera treatment unit to safely look after any cholera patients in the area.

A team has been deployed to Haiti from The Salvation Army’s International Emergency Services. Major Bill Barthau and Carolynn Barkhouse, both from Canada, are supporting the programs already underway while also working on a shelter project and a water and agriculture project.

Almost 1700 schools were damaged by hurricane, including some run by The Salvation Army, so another part of the recovery program will be to repair or reconstruct schools, and also to provide school materials and uniforms to some students. Carolynn says: “According to UNICEF [the United Nations Children's Fund] there are almost 900,000 affected children. We are planning to provide notebooks, schoolbooks, pens and uniforms to some of these children in order for them to return to school. Provision of these items will allow the children to continue their recovery process to what will be a new ‘normal’.”