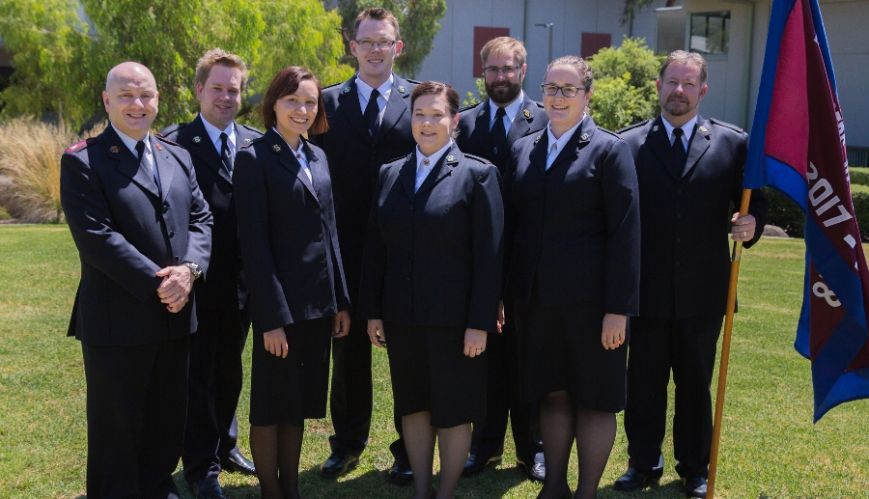 The Southern Territory Welcome to Cadets service was held in conjunction with Catherine Booth College Open Day for the first time on Saturday 11 February.

More than 400 people enjoyed the carnival-like atmosphere, which included tours of Catherine Booth College, in the Melbourne suburb of Ringwood, before the welcome service for the Messengers of Compassion took place.

“We as a college really wanted to engage with the broader community, at the same time as highlighting the significant step of faith that these cadets are taking,” said Assistant Training Principal Captain Adam Couchman.

“Through some simple and fun activities like jumping castles, a petting zoo and a free sausage sizzle, we saw doors open for some very significant conversations with people who had not had any previous contact with The Salvation Army.”

The service was led by the Chief Secretary-in-Charge of the Australia Southern Territory, Colonel Graeme Rigley, and was attended by 200 people who witnessed the welcome of cadets Aaron and Keryn Coombes, Graham Kennedy, Mitchell and Sally Stevens and Craig Boyd and Jessica Ffrost-Boyd (Cadets in Appointment). They will be commissioned at the end of 2018.

The service was opened in prayer by Assistant Training Principal - Operations, Major Priya Morgan, before The Salvation Army Big Band provided accompaniment for the song Wanted Hearts Baptised with Fire. Throughout the service, the cadets shared their heart for ministry with the congregation. Cadet Ffrost-Boyd read Psalm 103 and Cadet Keryn Coombes spoke about her call to officership, while Cadet Stevens offered a prayer prior to the introduction of cadets by Captain Matt Reeve.

The Salvation Army Big Band blessed the congregation with their rendition of What A Friend We Have In Jesus during the offering, before the outplacement appointments for second-year cadets, the Messengers of The Gospel, were announced.

Speaking about the nature of compassion, Colonel Graeme Rigley challenged the cadets to think about the phrase, “l am not at peace because you are not”.

“It was a great occasion,” said Captain Couchman. “We look forward to what God is going to do through these cadets now and into the future.”

The event followed a welcome to cadets in the Australia Eastern Territory on February 1. From January 2018, The Salvation Army's National School for Officer Training will be based at Catherine Booth College in Melbourne. There are currently 35 cadets training Australia-wide.