Life and death, choice and voice

Life and death, choice and voice 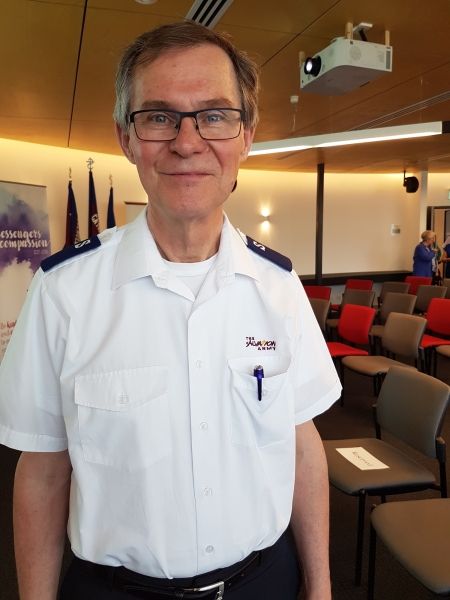 About 50 people gathered at a Salvation Army forum in Melbourne in February to talk about illness and dying. Some of those in the room had recently lost loved ones.

The newly appointed national head of the Salvation Army’s Moral and Social Issues Council (MASIC), Professor Graeme Young, opened the night, noting the topic was “a highly topical and emotional subject, that of facing death in trying circumstances,” and that “the provision of palliative care is a sign of a civilised society”.

The guest speaker for the evening - Canadian ethicist, academic, author and Salvationist, Dr Jim Read (pictured right) - was introduced by Professor Young as a moral philosopher and ethicist who “is interested in the space between theory and practice”. Dr Read’s PhD thesis on the subject of euthanasia, three decades ago, the professor noted, was still relevant.

Dr Read spoke about the legal and ethical circumstances around palliative care, “voluntary assisted dying”, and euthanasia in many countries across the world. He stated the issue was “current, deep, complex and enduring, with existential depth and agony ... if the dying has not been pretty, not been easy, then the questions are harder.’

He laid out the ethical, definitional and legislative differences in countries such as Canada, the US, Switzerland, Belgium, and the Netherlands, the questions of volition and the emotional weight attached to phraseology, and the reality that, from a medical perspective, “nothing equips a person to make that judgement”.

Speaking about the connections between despair and dignity, pain and peace, and relationships and perceptions, Dr Read said that life and the view of life being “worthwhile” and “of quality” are central to the issues raised. “People can be stripped of their dignity,” he said, “but the bigger story is that they are viewed, or view themselves, as ‘not important’ any more – they they’re irrelevant ... but our ‘having worth’ is because God, who created us in his image, views us with worth.”

Quoting a fellow Salvationist, a medical doctor and palliative care specialist whose wife had slipped into dementia, Dr Read said that “when we love and care for another, we identify with the eternal purpose and activity of God”.

Dr Read added that the emotional sense of responsibility of medical staff and the family of seriously ill people needs to be addressed, in the midst of “the pain of an incurable illness ... there needs to be, in the increasing understanding of the dynamics of pain management, an increasing awareness that the pain relief given didn’t cause the death of the person who was suffering and dying.”

In the midst of medical complexities and innovations, Dr Read made it clear that the informed withholding of some forms of treatment to a dying person, such as the withdrawal of oxygen or a respirator, did not constitute “assisted suicide”. In fact, he clarified, medical staff are often faced with ethical dilemmas by families who want to pursue every possible extension of life, to the point where staff may feel that they are “being asked to be a torturer of this person”. “Prolonging life isn’t the end goal,” he stated.

Dr Read stressed the holistic nature of human existence, where mind, body and soul or spirit were all aspects of a patient’s treatment, and spoke of the need for a sense of coming to a state of peace about a life lived, and a manifest desire to see life’s completion as “ending well”. He also refuted the notion that a loving God would judge or reject anyone whose life ended with, or without, medical intervention or treatment. “The God that we worship is not a God,” said Dr Read, “who is standing, just waiting for the opportunity to say, ‘Well, you got rid of your body before I wanted you to get rid of your body.’ That’s not the condition by which we are loved.”

Dr Read was at CBC as part of the International Scholar Series and presented a two-week intensive for our undergraduate and graduate students: Christian Ethics: Theories, Themes and Issues, as well as delivering the public lecture. You can watch a recording of the live streaming of this event.