At the Kokoda Track Memorial Walkway where participants on the Salvo History Tour learnt about the Salvo Chaplains in WWII. In the background, artists have etched into stone an iconic photo of a wounded soldier and Mjr Albert Moore, Red Shield Rep with the 2/14th battalion.

It was retired General Linda Bond who once said, “We need to learn and be a Salvation Army lifelong learner ... we need to learn our history”. Taking these words to heart, a group of about 30 history enthusiasts, led by Ron Inglis of Campsie Corps, recently enjoyed discovering the hidden history of The Salvation Army in Sydney’s backyard.

The historical tour began at Booth College in Bexley North and, over the next few hours, took in many historical sites at Campsie, North Strathfield, Belmore, Rookwood Cemetery, the Kokoda Memorial Walkway at Concord West, Burwood, Summer Hill, Petersham and, finally, Macquarie Lodge.

Opening the tour, the group learnt that the Booth College building, now known as the McIlveen Centre, was built by James Hay in 1916 as the Bexley Boys No.2 Home “for the training of necessitous boys”.

The first of many “drive-by” sites was the Campsie Corps where, in the park opposite, is a commemorative Salvation Army crest, thought to be the only memorial specifically dedicated to The Salvation Army in Australia. Another drive-by included the former Arnott’s biscuits factories in North Strathfield, opened in 1908 by William Arnott, father of Commissioner Arthur Arnott, a gifted Salvation Army musician and composer. Young Arthur was converted at a meeting at St Leonards and served as an officer for 37 years.

The contrasting architecture of the two halls at Belmore Corps, built in 1922 and 1960 respectively, were viewed while the group learnt that the Army first opened fire there in 1885 and now ministers to the community through the Sydney Korean Corps.

Standing in The Salvation Army section of Rookwood Cemetery, the group were able to contemplate the many faithful servants of God buried there. Of particular interest were Padre William McKenzie (“Fighting Mac”), one of the most widely known and popular padres of World War One, and the first Australian General of The Salvation Army, George Carpenter, who led the Army during the very difficult days of World War Two. 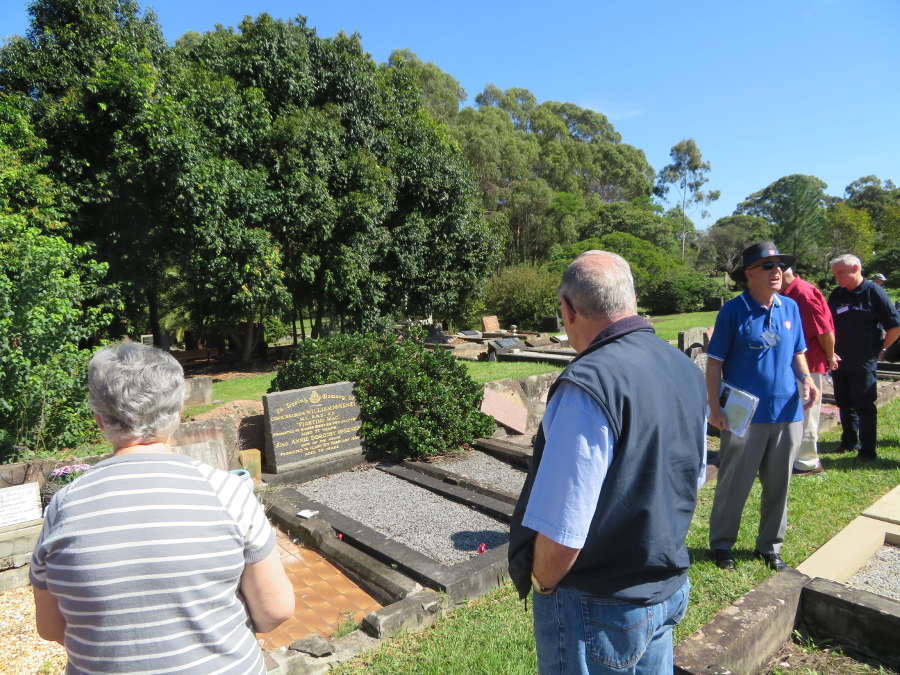 At the grave of "Fighting Mac" in Rookwood Cemetery, Sydney.

At the Kokoda Memorial Walkway the group watched a brief film about the battles along the Kokoda Track during World War Two.   Here, artists have etched in stone an iconic photo of a wounded soldier with Major Albert Moore, who was the Red Shield Representative with the 2/14th Battalion, the first AIF battalion sent to Papua New Guinea.

In the Rose Garden at the start of the walkway is a commemorative tablet to John McCabe, who was the longest-serving “Sallyman” in the Eastern Territory, having served in the Middle East, Papua New Guinea, Ceylon, Korea and Australia.

Driving past Burwood Corps, the story of one of its soldiers – “the prisoners’ friend” Brigadier John Irwin (OBE, OF) – was shared. He spent his entire officership in prison work and men’s social services. When he was promoted to glory in 1972, criminals, judges, barristers, police, and civic leaders came together to pay their respects.

The drive-by of the former hall in Summer Hill, closed in the 1930s, revealed it is now a private home. Built in 1892, this hall could be the only remaining 19th-century Salvation Army built hall in Sydney.

The tour then paused before the imposing facade of the former training college in Livingstone Road, Petersham, from which the first Sydney-trained session of cadets was commissioned in January 1922.

The last stop was at Macquarie Lodge and historic “Dappeto”, purchased in 1918. It was used for the next 50 years as a Salvation Army girls’ home, and is now part of an aged-care establishment.