When a Nigerian Salvationist and her family arrived in Sydney last year they had no family or friends to turn to and little knowledge of the country they had moved to. The one thing they did know was the address of The Salvation Army.

The family arrived at the Australia Eastern Territory’s then-Territorial Headquarters and the home of Sydney Congress Hall at around 11pm on a cold evening. With a toddler and a new baby, the parents tried as best they could to get some sleep outside the building in the heart of the city.

“We had no other choice but to sleep on the street,” the mother, Blessing, remembers. “That was my first experience in Australia which wasn’t something to write home about! We felt hopeless and lonely, but we knew the next day would come with a lot of joy.”

The family – who moved to Sydney so that Blessing could take up a place at Macquarie University studying International Business – had placed their hope in their church family, The Salvation Army. Despite knowing no Salvationists in Australia, they knew that they would be welcomed and accepted. When doors opened at THQ the next morning, their hopes were realised. 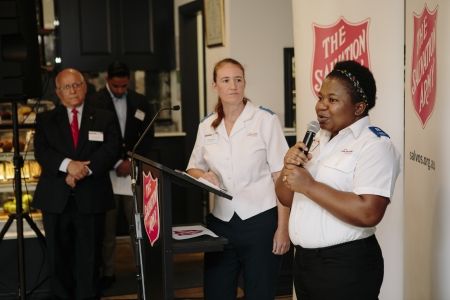 Despite saving to pay for university fees and set up their lives in Sydney, the family was overwhelmed by the cost of living in Sydney. Without the help of The Salvation Army’s Multicultural Services, Blessing says they may have abandoned their dream of living and studying in Australia. “Where would I be without the Salvos?” she says. “On the street. Because it would have been very difficult for us to raise the funds for a weekly house rental.”

The family began worshipping at Ryde Corps in north-west Sydney and were embraced by their new church family, with one corps member generously giving them a car.

Today, Blessing is studying and her husband has secured work. They are now a blessing to other new arrivals. “I volunteer at the English Conversation Classes [at Ryde Corps] where we teach many Syrian women who are newly arrived in Australia and help them to adapt and integrate into Australian society,” says Blessing. “Just like the Salvos helped me and my family.”