Salvo Erin sets City2Surf goal to stride out for homelessness Salvo Erin sets City2Surf goal to stride out for homelessness

The iconic City2Surf is the world's largest fun run. Local Menai Corps soldier Erin Harris (pictured below) has set her sights on raising $2000 for The Salvation Army through this year's run.

The first time Erin Harris took part in Sydney’s iconic Sun Herald City2Surf event with the Salvo Striders in 2014, it was more of a walk than a run for the Menai Corps soldier.

“A few days before the race I dislocated my knee playing netball. I had a whole lot of people behind me and had raised about $1200. I just felt I couldn’t not run,  so I competed with a knee brace. I was so devastated. I just felt I hadn’t done the run justice so I signed up again the next year.” 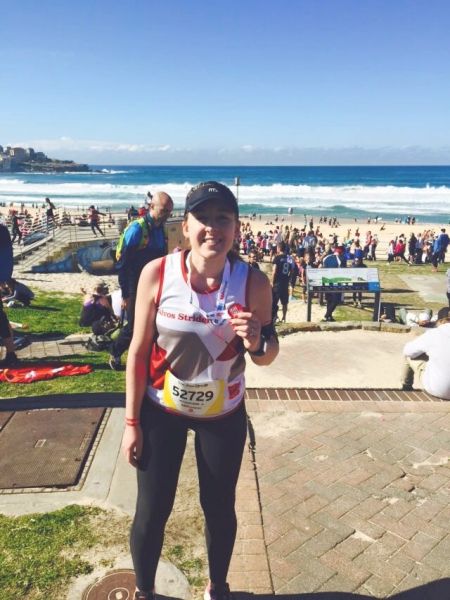 This year’s event, on 13 August, will be Erin’s fourth City2Surf, raising money for The Salvation Army. While she participates in other running events through the year, the 14km City2Surf, which follows a route from Hyde Park in Sydney’s CBD to Bondi Beach, is her primary focus.

“I like being part of the run and the team, but I also like that it sparks conversation with my workmates,” said the FlightCentre consultant (pictured right).

Her training is also an integral part of her spiritual life.

“My morning training is also my time with God. It’s the first thing I do in my day. Running is my time away from everything. I usually listen to an audio devotion while I run and I love being outside with my dogs. The training has developed discipline in me. I am a morning person. I wasn’t before I started running, but I am now.”

The 29-year-old is excited about this year’s Salvo Striders focus to raise money for homelessness.

“I didn’t really think about homelessness when I was living in Menai, but in 2012 when I got married, my husband and I bought a house in Holsworthy,” she said. “We have a couple of guys who live in the local park and as a community we have been working together to make sure they get the help they need. I do some travel with my job and that has also really raised my awareness. Sometimes we just don’t know how lucky we are.”

This year, Erin has taken up the challenge of being a Charity Superstar runner, which commits her to fundraising $1000 for the team. However, Erin has set her fundraising goal at $2000. In the past she has used Facebook to post training updates and rally supporters, but this year she has an additional strategy.

“Each month at work we have a monthly sales meeting of about 100 consultants. On the night we bring a donation to support a team member’s charity of choice. I was successful in applying to be that team member for August. It’s not my thing to get up in front of that many people, but I am excited about the conversations it will start and being able to share about the Salvos’ work. They are one of those organisations that everyone knows. It’s such a privilege to raise money for them. I guess I do have a bit of a competitive streak,” she says with a laugh, “so I love the challenge of fundraising and I have fun with it.”

She is also hoping to meet her running goal of finishing the race in 75 minutes.

“I am not a professional runner. My goal is to finish and to beat my personal time. When I race, I have this little phrase that I repeat. It’s from Joshua 1:19. I just repeat to myself: ‘Be bold, be brave, be courageous’. I don’t look how far I have to go, I just set my sights on the next marker ahead and try and remember how far I have come.”

Andrew Hill, Territorial Community Fundraising Director, said that for the first time this year, The Salvation Army would be one of five featured charities. Over the past four years, he said, it has become the “poster event” for a new suite of “peer-to-peer” fundraising opportunities that connects people through community events and interests to raise funds for The Salvation Army’s services.

“Salvo Striders is a modern-day entry point for meeting Australians where they are at. Groups like Salvo Striders are not designed to be exclusive groups but to be places to build community where Salvos can express their faith in a non-threatening and social way, as well as raising funds for the work of the Salvos,” Andrew said.

Participants register for the City2Surf and elect to raise funds for their chosen charity. Salvo Striders will also host a pre-race breakfast, which will be open to friends and supporters on the day.