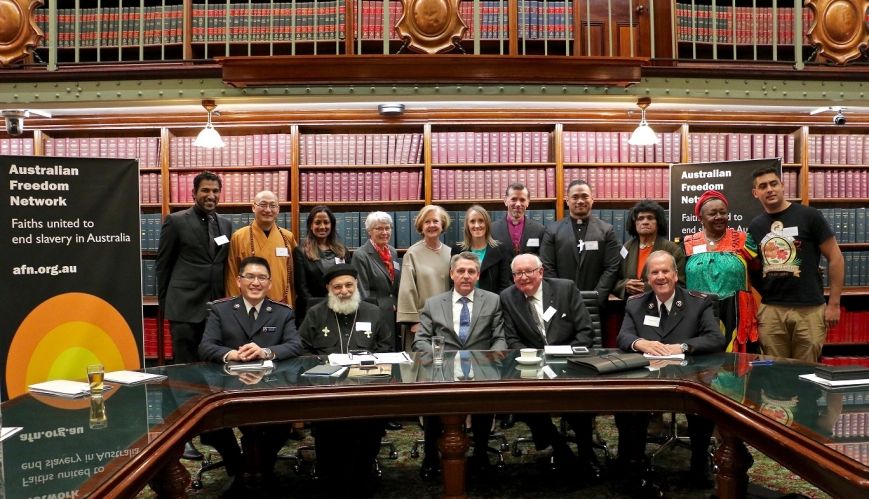 The Salvation Army, through its Freedom Partnership and leadership of the Australian Freedom Network (pictured above), has played an important role in bringing about today's Federal Government announcement regarding a Modern Slavery Act for Australia. In the front row above, far left, The Salvation Army’s former National Secretary, Lieutenant-Colonel Samuel Pho; far right is Commissioner James Condon, former Territorial Commander of the Australia Eastern Territory.

The Salvation Army has welcomed today’s announcement by the Federal Government to introduce a ground-breaking Modern Slavery Act for Australia – and so change the lives of thousands living in slavery, both in Australia and overseas.

This new legislation would require Australian businesses to report annually on steps taken to address slavery in their supply chains.

Jenny Stanger, National Manager of The Salvation Army’s Freedom Partnership to End Modern Slavery, said: “Today’s announcement is extremely significant because such legislation shifts the responsibility from victims who struggle to be visible to a proactive approach by business to find victims in their supply chain and take corrective action.

“This is about evolving a whole new aspect of justice for people, not seen since the days of William Wilberforce [an English politician and philanthropist who fought for decades for the abolition of the slave trade and who finally saw, in 1807, the Abolition of the Slave Trade Act that abolished the slave trade in the British colonies].

“We congratulate the government, with bipartisan support, for their leadership and look forward to continue working with them to see the legislation passed.”

In Australia, there are more than 4300 people enslaved. Through its national initiative to end modern slavery, The Salvation Army has been instrumental in mobilising community, business and government to realise their contributions to modern slavery and take action to eradicate it.

“This is an historic opportunity to evolve Australia’s response and we look forward to working with the government to ensure that robust legislation sets a new bar for eradicating slavery here and globally,” said Commissioner Floyd Tidd, National Commander of The Salvation Army in Australia.

The announcement comes at the same time an Inquiry into Establishing a Modern Slavery Act for Australia is hearing evidence after receiving 200 submissions from business, individuals, government agencies and civil society in Australia and around the world. In addition to the reporting requirements for business, many submissions have called for an independent anti-slavery commissioner similar to the UK Commissioner who can evaluate, coordinate and monitor Australia’s anti-slavery framework and strategies.

Luke Geary, Managing Partner of Salvos Legal, said: “We have been providing free legal advice and representation to victims of slavery here in Australia for almost 10 years now. We look forward to collaborating with the business community through our Modern Slavery Practice to ensure clean supply chains can be meaningfully evidenced. I am confident that Australian business is capable of world-class leadership and innovation in tackling modern slavery.”