The Salvation Army’s International Social Justice Commission (ISJC) has been heavily involved in the proceedings of the 72nd General Assembly of the United Nations in New York City.

Members of the ISJC have participated in meetings and assemblies in the UN Building and at the Church Centre for the United Nations. They have also hosted several functions on the ISJC's premises.

A highlight was the visit of the President of the Republic of Zambia, Edgar Lungu. The Zambian Mission to the UN is located near the ISJC and the Zambian ambassador asked if The Salvation Army would host a community meeting for Zambian citizens living in the United States.

The bonds between The Salvation Army and the Zambian Government are strong, after many years of working together to address the needs of the Zambian people. The ISJC was delighted to welcome President Lungu and four cabinet members to discuss issues of concern. It is hoped this can become an annual event at the ISJC.

The Salvation Army’s focus at the General Assembly is to reinforce its commitment to and encourage governments to make progress towards Agenda 2030, whose 17 Sustainable Development Goals were endorsed by all 193 member states of the UN in 2015.

Working under the theme “Focusing on People: Striving for Peace and a Decent Life for All on a Sustainable Planet”, events at the General Assembly reviewed what has been done towards achieving the goals and what is needed to ensure continued progress.

The ISJC works closely with other faith-based organisations in coordinating the responses of the global religious community, by participating in working groups, seminars, panels and forums. Topics covered included ending violence against children, addressing the rights of refugee girls, and raising awareness of religious persecution. 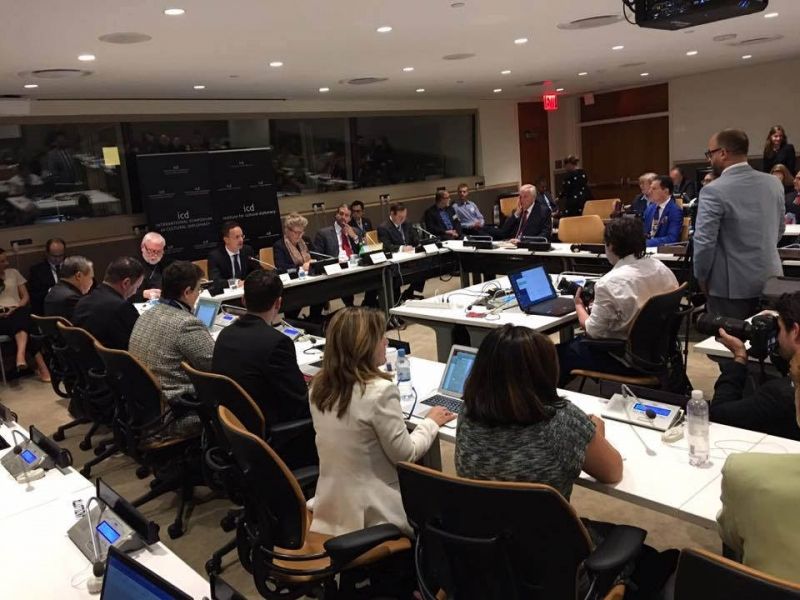 ISJC delegates taking part in a UN forum on persecution of Christians.

One initiative saw members of the ISJC attending a panel discussion entitled "Welcoming the Stranger – a discussion on making lives better for refugees in host countries". The panellists emphasised areas for improved long-term relief and development such as strengthening education and the rule of law.

The Salvation Army’s commitment to the Sustainable Development Goals and the biblical mandate to “love your neighbour” make this topic relevant to Salvationists and friends worldwide. The ISJC was particularly engaged in discussions on the global migrant crisis. It is planning to organise an event from 29-30 January 2018 called “Refugee and Migration Online Conversation – Mobilising All People of Faith”.

Representatives from the ISJC also participated in an event arranged by the Mission of the Holy See and the Hungarian Mission to the UN, about the protection of religious minorities in conflict. Revealing that about 80 per cent of people killed for their faith are Christians, the Hungarian minister noted a culture of “Christianaphobia” and stressed that governments should not overlook Christians killed for their faith in conflict areas.