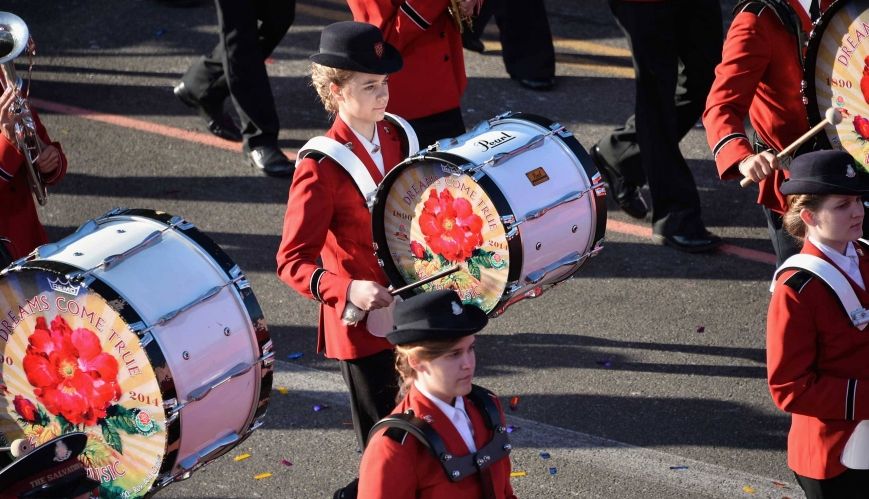 A National Youth Band will be formed to represent the new Australia Territory at next January's Rose Parade, in Pasadena, which is part of the United States' New Year celebrations.

The Salvation Army’s Southern California Division has invited a youth band from Australia to take part in the historic “100 Years of Marching Celebration” at the 2019 Tournament of Roses Parade in Pasadena.

At the recommendation of Lieutenant-Colonel Lyn Edge, National Secretary for Mission, a National Youth Band will be formed to represent the new Australia Territory at the parade. Other youth bands from around The Salvation Army world will also take part.

The Tournament of Roses Parade, also known as the Rose Parade, is part of the United States’ New Year celebrations. It is traditionally held on 1 January (where New Year’s Day falls on a Sunday, the parade is held on 2 January).

The parade includes flower-covered floats, marching bands and equestrian units and is followed by the Rose Bowl college football game.

The proposed dates for the National Youth Band’s tour are Tuesday 26 December 2018 to Tuesday 8 January 2019. The Southern California Division will host the band during that time.

In addition to marching in the parade, band members will also participate in an International Music School run by the Southern California Division. This will be an opportunity to share in music and faith with Salvation Army leaders and young Salvationists from around the world, as well as a launching pad for empowering young leaders from all divisions across the country into ministry.

Members of the youth band will be encouraged to explore other avenues of ministry and mission using the gifts, interests and abilities they have, with a view to developing these and supporting mission in their local areas.

Auditions for the National Youth Band will be held at various locations around Australia, or via Skype, beginning on 9 December 2017 in Melbourne.

An online Expression of Interest form must be completed by 27 November. This can be found HERE.

An information pack, dates and locations of auditions, audition material and an Expression of Interest form are available HERE.

Personnel for the band will be announced by 8 January 2018.

Captain Steven Smith will lead the project working team, supported by Chris Brindley, Ken Waterworth and Jordan O’Brien. Captain Smith has encouraged young Salvation Army musicians from across Australia to apply to be part of the National Youth Band.

“As I think back about the different opportunities that I was able to participate in as we played at our corps, in the local community around Australia and the opportunities overseas, these experiences of bands has helped me discover the medium of music to convey meaning and connect people with each other and their Creator,” Captain Smith said.

“These experiences are often great deepening seasons, they require a lot of preparation, effort and sacrifice but return far more to the growth of the people and those they encounter along the way.

“The potential of our bands is far more than the notes on a page, fingers on an instrument, or marching steps on the pavement. They can be formative communities that nurture and grow lives for Jesus and communicate his message of peace, hope and love.”