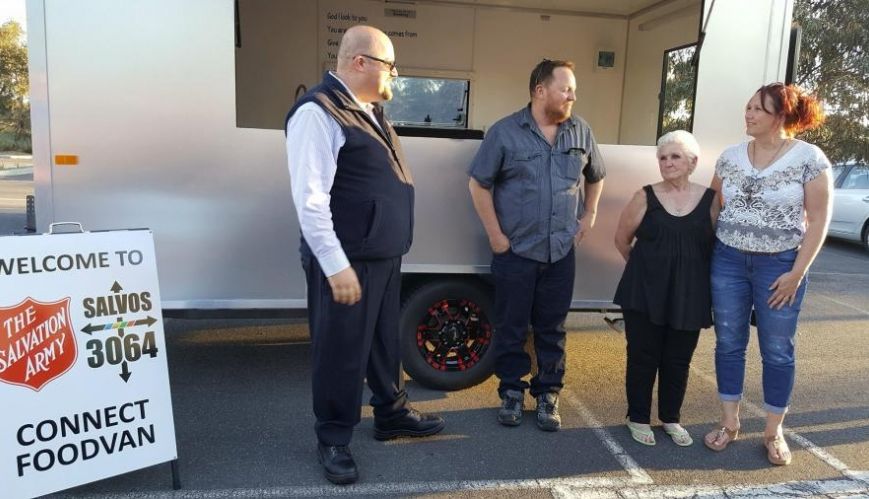 Several years ago, Salvationists from Craigieburn, north of Melbourne, had a dream of serving their community with a food van. The problem was, they didn’t have the money to buy one.

“It was just really a dream that we would really love to get out on the streets and do something, serve God outside of the walls of the church,” says Craigieburn Corps Officer, Captain Pete Brookshaw. “So, we went and looked at a few things and we found a broken-down caravan, but we came away from that search feeling a bit deflated and thinking, ‘But God, you wanted us to have a caravan, but we don’t have $60,000!’

“So, we just kept praying.”

Cragieburn Salvos runs a regular Tuesday three-course lunch for people in need or those in the community who are lonely. One of the organisers, Di, had been supplying a meal and some leftover food from the luncheon to a man she knew who was unemployed. The man eventually got a job with a local chassis and trailer company.

Terence, owner of the company, explains that as he was having lunch with his new employee, God stirred his heart. “We were just sharing and he was just telling me about Di and how she had been looking after him. He actually said to me that she was looking for a trailer.” Knowing that he could help, he phoned Di and offered to provide the Salvos with a trailer. Several other local companies helped to fit out the trailer.

At an informal launch of the new trailer, Captain Brookshaw thanked Terence and his wife, Susie, for their generosity and for listening to God and acting on his prompting.

“It’s for God,” said Terence. “It’s serving God. The only glory goes to God and no one else. As long as it’s used for his glory that’s all that matters.”

Captain Brookshaw also announced that Craigieburn Salvos had been successful in a grant application for $10,000 from Hume City Council, which will be used to fund the food van’s operation in 2018.

“There’s a big journey ahead of us. We have 41 volunteers seeking to help on the van, including half a dozen from Central Life Church Craigieburn,” he said. “It’s great to have them on board. It’s great to be partnering with other churches and other organisations.”

The Food Van will begin operation next year and is already booked for local festivals and to serve at local Anzac Day commemorations. It will be branded as a Connect Van and the corps has some specific goals for 2018.

“Secondly we want to connect people by having over 500 significant pastoral conversations with people in need through the van.

The lesson Captain Brookshaw has learnt is this: “It's one thing to have a dream, it’s another thing to go out and seek to fulfil the dream. God may place something on your heart, but until you have the courage to step forward and do something, it simply remains a dream.”