A bleak Christmas turns to joy 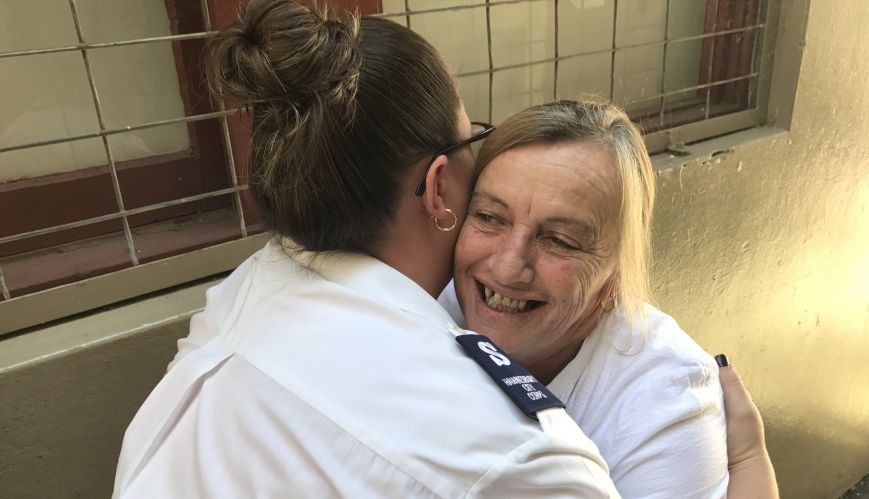 A bleak Christmas turns to joy

Di’s life was in turmoil when she came to the Salvos for help just before Christmas. She wasn’t expecting a miracle. She now volunteers alongside Hawkesbury Salvationist, Kim Taylor.

After successfully raising her two kids as a single mother on a low income, Di should have been enjoying an easier life, now that they had grown up and moved out. Yet the emptiness she felt brought with it traumatic memories of her past, and she suffered a nervous breakdown.

A few weeks before Christmas, Di had made her plans. With absolutely no money to buy her grandchildren a present, she decided there was no point in even seeing them on Christmas Day. She would make up an excuse, lock all the doors of her house and let the day pass her by.

“I was broken, I was devastated,” she now admits. “I had no plans on even going to see them if I couldn’t even give them a gift. I know Christmas isn’t about giving a gift, but when they’re only three or four they don’t understand. I didn’t want to see them if I had nothing to give to them.”

Hungry and desperate, Di walked into The Salvation Army and burst into tears.

“It was my rock bottom. Absolutely. I wasn’t well. I had a mental breakdown and was unable to work and everything was on top of me at once. I had no family around me at the time.”

Di had worked hard her whole life. After leaving her marriage of 18 years due to her alcoholic husband’s domestic violence, she secured a Department of Housing home and battled on a low income to put her kids through school (her daughter went to a private school) and give them the best start in life.

“I think I buried myself so hard in raising the kids, working, and just blocked all that out [her past abuse]. I had to be the strong one. There was no one around to pick me up so I had to be the one to show the kids that, you know, we’d be all right.”

But after her adult children left home to establish lives of their own, Di’s own life crumbled.

“I felt like because I had no kids to look after I didn’t have any more life. Or I didn’t deserve a life. I just got worse and worse. I couldn’t go to work.”

She lost her job and her physical and mental health deteriorated. All her life she had never asked for help, even though there were times she now admits she should have. When she finally did, two years ago, she got much more than she expected.

“They [the people at The Salvation Army] were very accepting, very loving, very kind. They sat and listened to what my story was. It was amazing. I walked away feeling like, actually, someone did care. Because they understood. They accepted me, they didn’t judge my circumstances. They just said, ‘There’s so many ways we can help you.’ And they did. First the first time in my life I accepted help and I was grateful that I did.”

Straight away, The Salvation Army paid Di’s overdue electricity bill and gave her a voucher to buy groceries. “I didn’t have to wait or anything. They acted straight away,” she says.

When the emergency assistance workers at The Salvation Army realised Di didn’t have gifts for her grandchildren for Christmas, they invited her to take part in the Salvos’ annual Christmas Cheer celebration.

“They set a day aside and they had the hall full of all these amazing, wonderful gifts and Nicole, the head of the church there, she helped me. We went around selecting toys for the kids from within their age-group that they would like.”

Di’s Christmas plans were transformed. She telephoned her daughter and invited the family to drop in on Christmas Day. Gone was the feeling of dread. Her hope was renewed and she was able to look forward to the celebration.

“They called in to see me. It was just so exciting to see them and be able to watch the kids rip open some presents and, you know, and be happy with what they got. It was amazing – it felt really good.”

After saying goodbye to her family, Di went out. She says she wasn’t really even aware of where she was going, yet found herself at The Salvation Army’s Christmas Day church service, renewing her faith in the God who had given back her hope.

“I didn’t even know where I was going that day. I just ended up there. I had to go and give thanks back to them for making it such an amazing day for me.”

Di is now a regular volunteer at the Salvos and attends church every Sunday. Her faith is strengthening. Even though times are still incredibly difficult financially [after paying her rent and bills, Di has just $20 a week for food and other expenses], she is able to endure her circumstances with the help and support of her new-found “family” at the Salvos.

“When I was down and out and had nothing or no one, when I walked into that church and someone was there to welcome me and make me feel OK, it was really, really, good. I’d like to do the same for others when they come in.”