Mission to the Bush brings Christmas cheer to struggling farmers Mission to the Bush brings Christmas cheer to struggling farmers

The annual Christmas mission to the bush took in the towns of Quilipie, Thargaminda, Toompine and Eulo in the far south-west of Queensland.

A Christmas carol and toy run through south-west Queensland has impacted the lives of rural families and those who volunteered their time on the mission.

Organised by South West Queensland Flying Padre, Captain Mark Bulow, the annual Christmas Mission to the Bush took in the towns of Quilipie, Thargaminda, Toompine and Eulo in the far south-west of Queensland. The team performed Christmas concerts and delivered donated toys to children in these remote communities.

“The response and acceptance by the local people is always heart-warming for those of our little team of musicians,” says retired Salvation Army Major Bob Strong, a member of the team for many years.

“At the conclusion of the service in Eulo, a lady came to us and said we had to come to her place for breakfast before we left town in the morning because she wanted to repay The Salvation Army for the assistance they had given her and her husband after the 2011 floods devastated their farm.”

Despite lots of rainfall on the eastern seaboard, Major Strong says many farmers in rural areas are still struggling.

“Back home on the coast it is easy to get ‘all caught up’ in the hyperactivity which Christmas time brings and to forget there are many fellow Aussies who are doing it tough not very far away as they struggle with drought and other farm-related issues.” 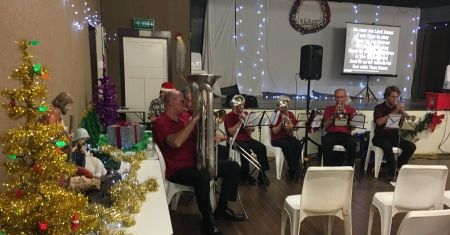 The youngest member of the Christmas Mission to the Bush team this year was 17-year-old Hayden Capell (pictured far right). Before he left, he knew very little about The Salvation Army. A keen musician, who admits he’ll “take any gig he can get”, he was told by his music teacher that the Salvos were looking for “people to play cornet on a Christmas carol tour out west”.

The experience has been life-changing for Hayden.

“I was in it just to play music but one of the best experiences has been meeting all these people out there,” he says. “The quality of the character of the people who live out in those towns is second-to-none and the [Salvation Army] characters running it all are just some of the best, most giving people.

“So it’s been not only a great musical journey but also a great journey to strengthen my character.”

Hayden says for as long as the band will have him, he’d love to continue playing on bush mission trips and in other Salvation Army events. “Playing with these people who are so rooted in their style of music, it’s been great fun,” he says.

Major Strong says the Christmas to the Bush Mission always leaves him with a better perspective on the real meaning of the season.

“When we take the effort to make Christmas time a little special for someone in need, we receive a great blessing back.”