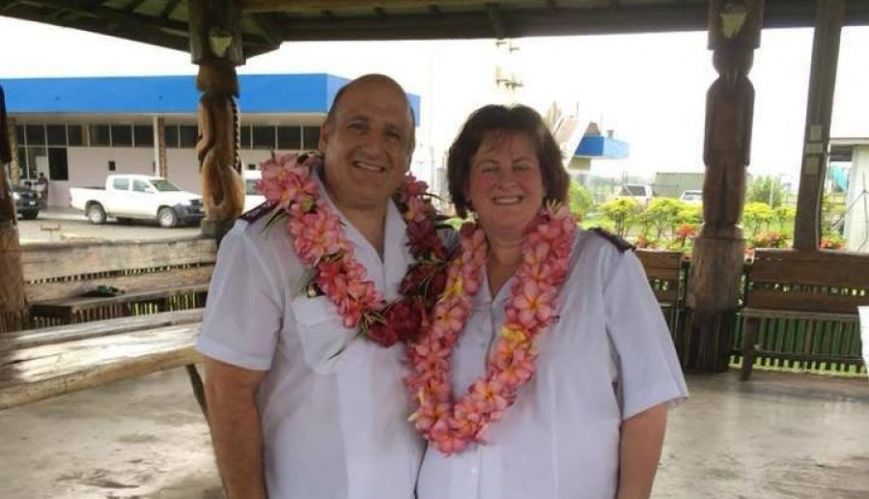 Majors Robert and Vanessa Evans had never been to the Solomon Islands before their appointment this year as Officers-in-Charge.

Australia Southern Territory officers, Majors Robert and Vanessa Evans, have been installed as the Officers-in-Charge of The Salvation Army’s work in the Solomon Islands.

“The new leaders were greeted in traditional Solomon Islands fashion with an exceptional all-male dance group,” said Colonel Kelvin Alley, the Territorial Commander. “Despite the constant heavy rain over many days, there was an excellent attendance. There was a happy, jubilant crowd, which included many children, and a very strong expectation in the air of what God will do in these future days.” The Salvation Army has had a presence in the South Pacific nation of Solomon Islands since 2010 and its work was officially launched as part of the Papua New Guinea Territory in 2011. Apart from a corps in Honiara, The Salvation Army has several fellowships and missions in provinces across the island group.

“The growth is phenomenal,” said Major Robert. “It’s happening all by itself. During the course of the installation weekend, word came through that a Salvation Army fellowship in North Malaita was about to send two soldiers to a nearby island to commence the work of The Salvation Army there.

“One of the things we need here desperately to keep up with the growth is uniforms. We don’t have enough of them!”

Majors Robert and Vanessa Evans have been Salvation Army officers for the past 21 years, serving in the Northern Territory, South Australia and Victoria. They have a passion for cross-cultural ministry and have led a number of overseas mission trips during their officership.

They had known for a number of years that God was calling them to serve overseas, and due to their time serving in ministry in Indonesia, they expressed an interest in a posting there.

“We went in there [to a meeting at Territorial Headquarters] to talk about Indonesia and we came out with Solomon Islands,” Major Robert recalled. “So that took us by surprise. But everything about this appointment was just right.”

“Our mission is about joining in with what God is already up to,” Robert explained. “We don’t need to take God anywhere, he’s already here.”

Another is to raise up local leaders and create a financially sustainable Salvation Army through social enterprise that can support its booming growth.

“We are really praying for wisdom that any social enterprise opportunity it is a cultural fit for the communities that we are working in,” said Major Robert.

The Evans’ have left behind their twin children who have just finished high school. While difficult, they know that their appointment is God-ordained, and technology means that they can video-call their kids at any time.

“It wasn’t just our decision it was theirs as well,” said Major Vanessa. “They said, ‘don’t you ever use us as an excuse for not going overseas and fulfilling God’s calling upon your life!’”

Majors Robert and Vanessa Evans are asking Australian Salvationists to keep them and The Salvation Army across the Solomon Islands in their prayers. People can connect with the ministry through their Facebook page: www.facebook.com/TSASolomonIslandsMinistries