Messengers of the Kingdom officially welcomed into new college Messengers of the Kingdom officially welcomed into new college

Cadet Alice Edge, speaking about her call to officership at the official welcome to the Messengers of the Kingdom on Sunday. Photos: Jacob Dyer.

The first intake of Salvation Army cadets to the Eva Burrows National College were officially welcomed during a special ceremony in Melbourne last Sunday, 11 February.

Nine cadets of the Messengers of the Kingdom 2018/19 session, who have already taken up residence at the new college, were greeted with a salute by The Salvation Army’s national leaders, Commissioners Floyd and Tracey Tidd, as they filed individually onto the platform accompanied by a rousing march from the Melbourne Staff Band.

Held at the Besen Centre in Burwood, the Welcome to Cadets ceremony also included the launch of the new united Victoria Division and the installation of Divisional Leaders, Lieutenant-Colonels Bruce and Debra Stevens. 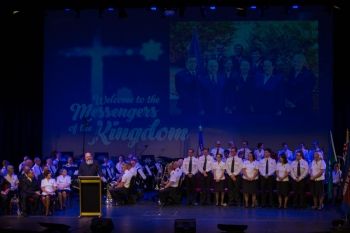 After a word from Commissioner Floyd Tidd, the cadets were then “handed over” to the direction of National Training Principal Major Gregory Morgan.

Representative speaker, Cadet Alice Edge, then spoke about her call to officership, a childhood dream that dimmed when she experienced difficult years, but which flamed back into life when she recommitted herself to God’s will.

During the event, the 17 cadets of the Messengers of Compassion also received their out-placement appointments.

After a rallying call regarding the national vision of transforming Australia one life at a time, Commissioner Floyd Tidd presented the Victoria Division flag to the Stevens’. Area officers for Victoria were also affirmed and stood under the new flag. 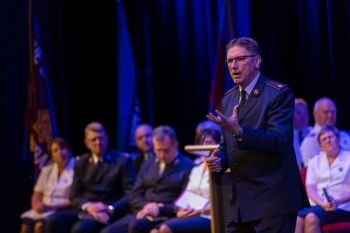 “With no shortage of hardship or injustice,” Lieut-Colonel Bruce Stevens declared in his address, “God calls us to commit ourselves to live, love and fight alongside others and relate with love and compassion to those who have practical, social and spiritual needs.”

Making the point that officers are “ordinary people”, Commissioner Floyd Tidd made a call for candidates, stating that, “Ordinary people can do extraordinary things.”

The meeting closed to the triumphant strains of His Kingdom Comes.