The Red Shield Appeal launch in Melbourne clearly demonstrated the hope made possible by the work of The Salvation Army around the city, state, and beyond.

A $150,000 donation from the Victorian Government today has kickstarted The Salvation Army’s Red Shield Appeal in Melbourne.

“We have assets that, in the 21st century, are pretty much unfit to live in,” the minister said bluntly, adding that “we can do better if we partner with the private sector and The Salvation Army. Any one of us could be in circumstances where we could need the services of The Salvation Army.”

Broadcaster Stephen Quartermain welcomed the city’s business and community leaders to the launch. He cited the many services provided by The Salvation Army, the projected national appeal goal of $73 million, and said it was hoped that “almost $18 million would be raised here in Victoria”.

One of the highlights of the launch was journalist Nick McCallum’s interview with Major Brendan Nottle, leader of The Salvation Army’s 614 Corps in central Melbourne, about his 2017 walk for the homeless to Canberra. 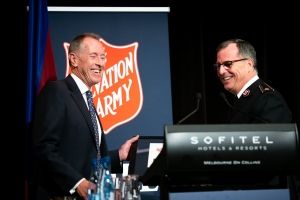 The launch was attended by The Salvation Army’s national leaders, Commissioners Floyd and Tracey Tidd. After addressing the audience, Commissioner Floyd Tidd took the opportunity to honour the Army’s corporate and philanthropic committee chair, David Williamson (pictured right), for his three decades of committed, passionate service, presenting him with the Army’s “Others”award.

Commissioner Tidd, concluding the event, said, “More than a million people, unable to turn to family and friends, turn to The Salvation Army because of the unexpected things that happen in their lives.”

The breakfast launch of the Gold Coast Red Shield Appeal also took place 3 May, at the Crowne Plaza Hotel in Surfers Paradise.

“You haven’t just donated to a charity this morning –you have given hope where it’s needed most,”said Lieutenant-Colonel David Godkin, Queensland Divisional Commander, during the breakfast.

Lieut-Colonel Godkin shared the words from Salvation Army Founder, William Booth’s “I’ll Fight”speech with the almost 300 business, government and community and leaders gathered for the launch, explaining that this is also the work of The Salvation Army today.

“We can’t do it without you, though, and because you’ve come today, because you support, encourage and believe in our work, we are surrounded by hope and can fight for those in our community experiencing hardship and injustice.” Andrew Archer (picture left with Lieut-Colonel David Godkin) was guest speaker at the breakfast. In his powerful testimony, Andrew shared his journey of abuse, addiction and desperation, and how twice, The Salvation Army has come to his assistance, through Recovery Services, Extended Care and the local corps “to love him back to life”.

“I’m under no illusion that God has saved me,”he said. “God’s spirit is manifested in the Salvos –look at the food they give out, the financial advice, the love, the help to fight hardship, transforming Australia one life at a time –just like they did for me.

“Thank God I’m here and thank God for the Salvos.”