The Salvation Army has welcomed the successful passage of Australia’s first modern slavery bill through the Parliament of New South Wales this morning.

“New South Wales has set the bar for states to assume their rightful place as active partners in the fight against modern slavery,” said Heather Moore, The Salvation Army’s National Policy and Advocacy Coordinator.

“This legislation achieves an important milestone in Australia’s fight against modern slavery. While slavery is a federal crime, it is a crime that occurs in our communities and neighbourhoods; it cannot be eradicated without proper cooperation from state and local stakeholders.”

Ms Moore said she was pleased the bill had adopted a number of recommendations that were proposed by The Salvation Army, including the establishment of an anti-slavery commissioner to combat slavery-like practices in NSW and a parliamentary committee on modern slavery. 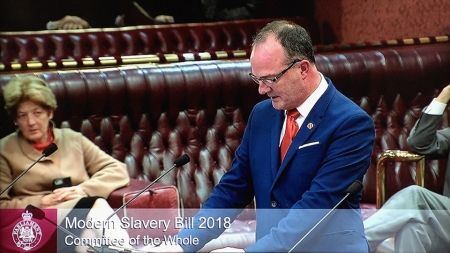 “The Salvation Army has been advocating for 10 years for states to take more leadership on this issue and develop coordinated strategies with the Commonwealth to combat slavery,” she said.

“To have a designated point person and consistent parliamentary attention to this issue at the state level is a welcome development. We hope to see similar roles appointed in states around the country and at a national level.

The Salvation Army also welcomed a new requirement for the NSW Government to report on what it is doing to ensure goods and services procured by the state are not products of slavery.

Ms Moore said the supply chains provisions in the Act provided a positive starting point for long-term engagement with stakeholders.

The Salvation Army, in partnership with the anti-slavery coalition, strongly encouraged the NSW Government to conduct extensive consultation with business and civil society in developing the regulations and implementing this historic legislation.

“We need to adopt a positive and collaborative approach to abolish modern slavery in supply chains,” Ms Moore said. “This will require engagement that encourage business to be transparent about their risk and support them to minimise it. The Australian business community has really risen to this challenge over the last year and we look forward to continuing our strong partnership with them to ensure the Act and its regulations encourage a race-to-the-top and reward those businesses providing leadership and vision in the fight against modern slavery.”

Through its national initiative to end modern slavery, The Salvation Army has been instrumental in mobilising community, business and government to realise their contributions to modern slavery and take action to eradicate it.