Mission team member, Margaret Poore, who studied Spanish for the trip, with Ecuador's Major Gloria, reads to children at The Salvation Army school in Cayambe.

The Parramatta and Ryde Corps in Western Sydney recently sent a small mission team to Ecuador, a country straddling the equator in The Salvation Army South America West Territory.

The team helped run a camp for 125 young people, aged 14 to 30, from Salvation Army corps and social centres across the country. The camp was held at Tabacundo, north-east of the capital Quito, last November. 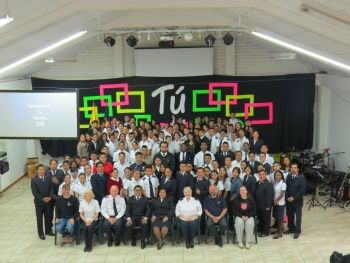 Camp delegates and staff at the youth camp.

“The camp was run along the lines of a Red Shield camp with a variety of activities,” said Major Sharon, who coordinated the mission.

“We ran classes in discipleship, drumming, leadership development and craft. The theme of the camp was ‘It's up to you’, or, in Spanish, ‘Tu Decides ’.”

Margaret, who also teaches English as a Second Language (ESL) in the local community, taught English at the camp. She had studied Spanish intensively for several months before the mission trip, which helped her understand some of the challenges facing her ESL students. 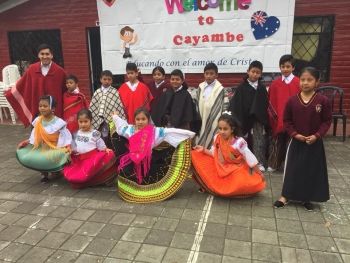 A welcome from the children at the Army school.

The team also ministered at The Salvation Army school in Cayambe and assisted with worship in Colmena and Quito Sur.

All mission trip delegates had learned some basic Spanish words and phrases in the months leading up to the trip, in order to provide a framework of the language and increase the team’s effectiveness with the young people and others they came into contact with.

Major Grant said that, they were grateful though, to have skilled interpreters on hand, particularly when it came to teaching and preaching.

“It was exciting that the local teams led the camp,” said Major Sharon. “They had given us the brief and we were supporting it. We didn’t dominate but walked alongside, building up, encouraging and supporting – true mission.”

The Parramatta and Ryde Corps financially supported the team and made possible the mission and youth camp, together with contributions from the NSW/ACT Division.

Delegates also raised funds for their own expenses, and to contribute to the work of The Salvation Army in Ecuador. Children at the Army's school.

The contact with Ecuador came when Major Grant met an Ecuadorean delegate at the International College for Officers in London, who spoke about the need for youth camps in the developing nation.

Majors Samuel and Gloria Flores, then divisional leaders in Ecuador, made further contact and the Parramatta Corps committed to assisting with the camp.

Majors Flores assisted the mission team during their stay in Ecuador. Major Samuel’s brother, Captain Eliseo Flores Morales and his wife opened the work of The Salvation Army in Ecuador.

* Ecuador is one of the nations featured in this year’s Self Denial Appeal. The video from Ecuador for the appeal was shot in Quito Sur and one of the young girls featured in the video attended the youth camp.