Corps around the country celebrate World Day of Prayer Corps around the country celebrate World Day of Prayer

World Day of Prayer's artist, Rezka Arnuš, with her original artwork showing people on the fringes of society accepting the invitation to the banquest, in keeping with the day's theme.

The Bega Corps, on the Far South Coast of NSW, joined other corps and churches around the country today to celebrate the annual World Day of Prayer.

Some corps hosted their own service or combined with other churches to run an event in their local community.

The World Day of Prayer is a global ecumenical movement led by Christian women who invite and welcome women and men from a range of races, cultures and traditions, to join in prayer and action for peace and justice.

The event, inspired by the motto ‘Informed Prayer and Prayerful Action’ is celebrated in over 170 countries on the first Friday in March.

Each year a different country chooses a theme and program. This year’s country is the European nation of Slovenia, with the theme ‘Come–Everything is Ready!’, based on Psalm 34:8: “Taste and see that the Lord is good; blessed is the one who takes refuge in him.”

The program centres around hospitality and God’s consistent invitation to a banquet of grace and love.

For churches that have signed up, packs are provided complete with liturgy, posters, accompanying sheet music and children’s worksheets. Resources can be downloaded here.

Bega Corps Officer Captain Deb Parsons, with Captain Rod Parsons and corps volunteers, today held a World Day of Prayer service to pray for Slovenia, and for peace and justice around the world. 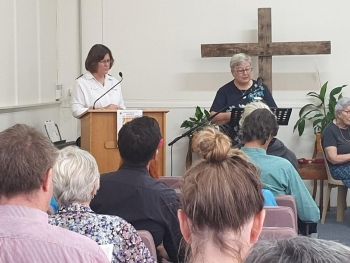 Captain Deb Parsons gave the main message during the service.

A lunch featuring traditional Slovenian food as well as baked goods and slices, brought by participants, took place after the service. The goal was to prepare a Slovenian-style banquet table.

“We held a planning meeting months ago, and have had input from different local churches for the service,” said Captain Deb. “We have also used the information that the World Day of Prayer provided.

“I have a short message, based on the Bible study information that came with the World Day of Prayer kit. This focused on going out and telling others about Jesus, and bringing them in to share our joy and our hope.

“We want to be able to share God’s message in a way that is so compelling that people can’t ignore it. This only comes when we fill our message with our own enthusiasm and joy. This also fits with our corps theme for the year – the joy of the Lord is my strength.” 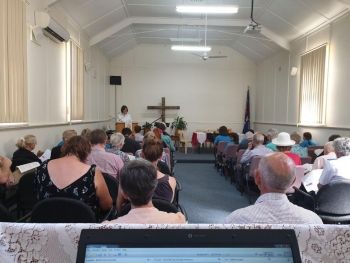 The service opened and concluded with Slovenian women singing – again provided in the kit.

Local church representatives from almost all Bega churches also contributed to the service.

"The children led us in a children's prayer, joined in all the songs, took up the offering, and carried all the food from the 'banquet table' to the eating hall," Captain Deb said.

“We were delighted that people came and were so interested and excited about this event. We did the Master of the Great Banquet proud."