Women of Queensland 'captivated' by the vision Women of Queensland 'captivated' by the vision

Jeanette Fabila (centre) gave the acknowledgement of country accompanied by her team of Aboriginal and Torres Strait Islander dancers.

Almost 300 women from across Queensland and Northern NSW attended the Captivated women’s conference in Brisbane on 22-23 February.

An additional conference to be held in Townsville the weekend before had to be cancelled due to the floods. 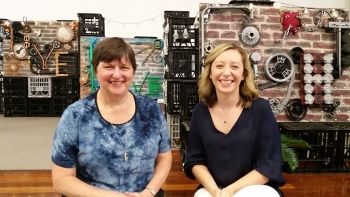 ‘Live, Love, Fight’ was the theme of the annual conference.

There were two guest speakers – Lieutenant-Colonel Lyn Edge, National Secretary for Mission, who spoke on ‘live’ and ‘love’; and Casey O’Brien Machado, from the Policy, Research and Social Justice Department, who spoke on fighting for social justice.

“This theme comes from our National Vision Statement and the biblical call is to live for a world in which all can flourish, a world where life is lived as God intended,” said Lieut-Colonel Edge.

“Our call to love is one which embraces all of people and all of communities. It is holistic and integrated. Pure love shapes how we live, so that we can partner with God to see God’s will done on earth as it is in heaven.” Some of the Brisbane delegates at Captivated.

“We stand for the Kingdom of God,” she said. “Sometimes we have to stand against things that don’t fit in with God’s vision for his world – THIS is why we fight.

Casey quoted Geoff Ryan, who said: “The reality keeps me awake at night, but the vision gets me up in the morning. How do we change our reality into God’s vision for the world? The reality will not change on its own, and the vision will not suddenly be borne out of nothingness. It will not happen without a fight. It has to be fought for, it has to be taken by force, it has to be forged in battle.”

Casey explained that we fight the reality of what is around us with our eyes fixed on the vision. “As followers of Jesus, we each have a part to play in the advancing of God’s Kingdom – none of us is exempt,” she said.

Other highlights of the event included Jeanette Fabila’s ‘Acknowledgement of Country’ featuring Aboriginal dancing, times of sharing and worship, and vibrant fellowship between women of all ages and backgrounds. Three powerful testimonies were also given – Major Lauriee Arthur spoke about her ministry as a Red Shield Defence Services chaplain and how she connects with soldiers and their families; Michelle Kingston-Kerr, from North Brisbane Corps, shared her struggle with mental health and the challenges of being a parent of a child with multiple complex needs; and Christina Hassam, from Bayside Community Corps, spoke on her challenging childhood, which has led her to want to share the love of Jesus through her ministry of catering to people in the community who connect with Bayside Corps for assistance.

During the breaks, the women spent time at the ‘Market Place’ with Salvationist Supplies, a Fairtrade stall, Salvos boutique, jewellery, coffee and grazing tables available.

Each delegate received a token, valued at $4, from their registration fee, which they used to help support one of two projects:
Project One: A pamper day in the remote community of Urandangi, run by The Salvation Army in Mt Isa for women, children and families from isolated communities in Far North Queensland; and Project Two: Sponsorships for Salvation Army recovery services participants to attend Salvos Women retreats across Queensland.

Major Smith announced that Queensland raised $40,820 for the 2018 Women’s Ministries Territorial Project – the Simba Project. This project, based in Kenya, is a collaboration with local partners, schools, government and law enforcement to raise awareness of the dangers of trafficking. 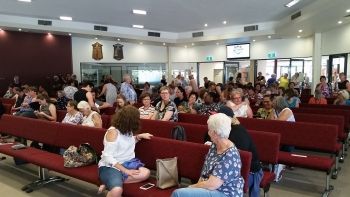 The Territorial Project for 2019 – ‘Women of Worth’ – was also launched and a generous offering was received.

"This project will help women in Africa to develop literacy and numeracy skills , save money and access credit to enable them to become entrepreneurs and community leaders," said Major Smith.

Another special aspect of Captivated was the sponsoring of four ladies from Townsville to attend the conference.

“These ladies have been engaged in ministry to their community during the flood recovery and we were glad that they had the opportunity to experience the blessings of the conference.

"We thank God for the many blessings received during the conference. Our guest speakers [Lyn and Casey] were so relational in their messages to our women.

“It was a delight to see so many women coming together to enjoy all that the conference offered them and we pray that they return to their corps feeling uplifted and inspired to flourish in the communities they live, love and fight in.”