While thousands of Australians stop to remember, cheer and support their loved ones this Anzac Day, what happens to the veterans who are all alone, or without a home?

A recent report released by the Centre for Social Impact, The State of Homelessness in Australia’s Cities, states that out of the 116,000 Australians who experienced homelessness in 2018, one in 20 were Australian Defence Force veterans.

Corporal Walter ‘Wally’ Raymond Buckland, an only child with no surviving next of kin, could have quickly fallen through the cracks, making up yet another number to add to these unfortunate statistics. But thanks to a handful of loyal and loving friends (pictured with him right), Wally is not alone this Anzac Day. 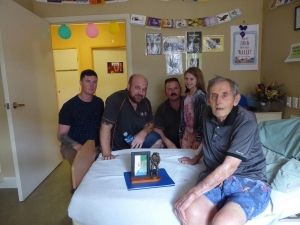 Wally Buckland was born on 11 February 1939 in Goulburn, a regional city in the Southern Tablelands of NSW. At the age of 27, Wally began his career with the Australian Army and took part in two tours to Vietnam in 1967 and 1971. During his first tour to Vietnam, he became a member of the Anzac force of troops who took part in the Battle of Long Tan. After three days of intense fighting, the Anzac troops prevailed, with Wally surviving to tell the tale.

Today, Wally still lives in his hometown of Goulburn, in the memory support unit of The Salvation Army Gill Waminda Aged Care Centre. While Wally can recall stories from long ago, a recent diagnosis of dementia has meant that he struggles with remembering day-to-day events. 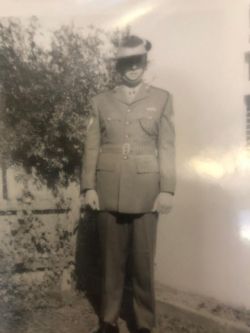 Wally doesn’t have any remaining family members to share his memories with, but he certainly isn’t short of friends. Frequent visitors like his former Goulburn neighbours – Les Reko, Howard Bye, and Helen and Peter Corby – have made sure Wally is constantly supported and surrounded with love.

Over the years, Les and Howard have made sure Wally did not miss commemoration activities for Australian Army veterans, and the Corbys take care of Wally’s beloved dog Kelly, reuniting the pair through regular visits.

Kerri Hartney, manager of The Salvation Army Gill Waminda Aged Care Centre, says that it’s been heart-warming to see the community rally around Wally. “Despite Wally’s condition, it has been great to see him being celebrated by the community and his friends from the army and to see him finally receive the recognition that he deserves. He is well loved by the staff at the centre, who have collected photos and memories of Wally’s life.”

Earlier this year, Wally celebrated his 80th birthday, and the staff at the Centre organised a special birthday party for him, which was attended by his long-time friends, neighbours, and former army mates. 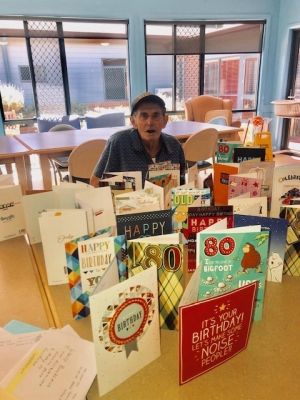 Leading up to the special day, Wally’s friends created a post on Facebook asking fellow veterans to send their birthday wishes. Since then, the staff at Gill Waminda say they have received over 25 birthday cards and 20 emails a day, as well as countless gifts, visitors, and phone calls – all celebrating Wally and his years of service.

Every day, they read new cards and emails to Wally, place them on display around his room, and help him open his gifts. Rebecca Ness, Recreational Activities Officer, has been instrumental in ensuring Wally receives the recognition he deserves, with the help of Michael Singh (Maintenance Officer) and Kathryn Price (Care Manager).

The staff also welcome his guests – which have included students from the Long Tan Company, Duntroon, serving and retired officers from Kapooka Wagga Wagga, the Veterans Motorcycle Club, Bob Tetley, a Vietnam veteran from Long Tan (who mounted all of Wally’s medals for him), and NSW Senator Jim Molan, an Australian politician and former major general in the Australian Army.

This Anzac Day will be no different for Wally. He certainly will not be alone, nor will he be spending it on the streets. He will be in the comfort of loving home at The Salvation Army Gill Waminda Aged Care Centre, most likely attending an ANZAC Day service, surrounded by old and newfound friends, cadets from Long Tan Company, the doting staff, and his loving dog Kelly.

* Arieta Tora is the Communications Manager for Aged Care Plus Support Services.