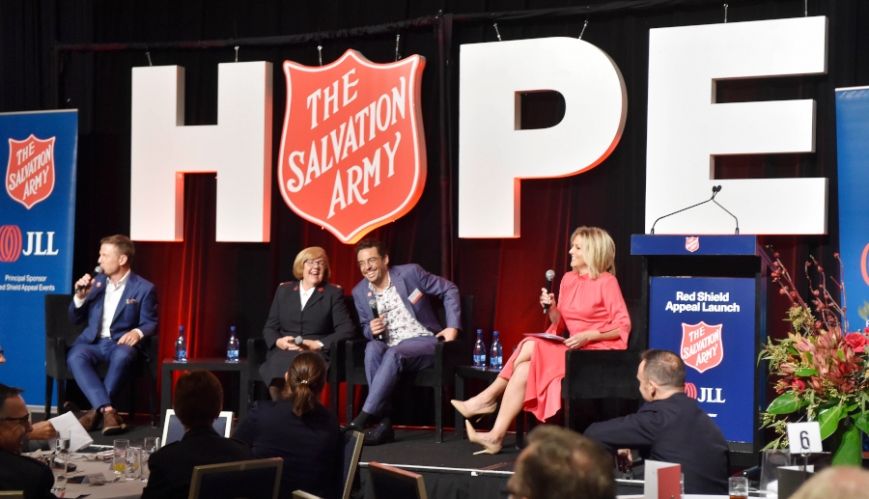 A flurry of large donation announcements from all parts of the ballroom in the Sofitel Hotel on Phillips Street dramatically increased excitement and energy levels near the end of the Sydney launch of the Red Shield Appeal on 3 May. 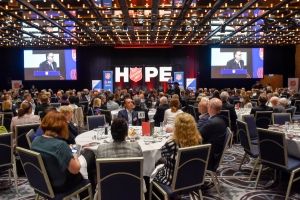 More than $800,000 in donations was announced in a few minutes as Channel 9 and Radio 2GB personality Ben Fordham announced the NSW Government donation of $200,000 and then asked if anyone in the room was going to match the figure.

Quickly a donation of $225,000 was given, which was matched by the government, and then rapidly more and more people rose to announce their gifts to The Salvation Army. People said they were giving because they want to assist The Salvation Army provide help and hope to those who need it most. The final amount raised on the day from the just more than 400 people in attendance was more than $1.1 million, with the promise of more donations to come. 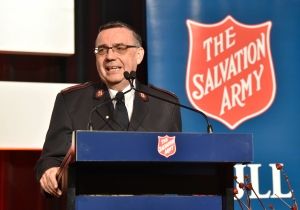 Earlier in the launch, Major Paul Moulds had passionately outlined how The Salvation Army does everything it possibly can to bring love and hope to the darkest areas of life. “There is no pit too deep where love can’t reach you and hope can’t pull you out.”

Major Moulds told a little of Craig McGuire’s 30-year journey with The Salvation Army in his fight with alcoholism and homelessness. Craig then shared of how his life has changed from being a homeless drunk on the streets to now helping others in need.

NSW and ACT Divisional Commander Lieutenant-Colonel Miriam Gluyas told a number of exciting stories where people’s lives have been dramatically changed through the God-inspired work of the Salvos. 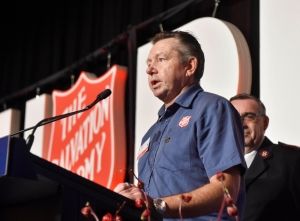 In an innovative change to the launch format, instead of one keynote speaker a panel of Fordham, Joe Hildebrand (Channel 10 and News Limited), Georgie Gardner (Channel 9) and Major Beth Twivey vulnerably and caringly spoke about issues affecting everyday Australians. The panellists shared from the heart and provided stories of how The Salvation Army positively brings transformation to people adversely affected by day-to-day life.

A significant surprise moment was the presentation to Robyn Hobbs and Alex Gottshall of the inaugural Salvation Army Others Award for people who have greatly assisted The Salvation Army in its ministry. Robyn is the founder of the Carols in the Domain event that for 36 years has raised millions of dollars for The Salvation Army Oasis youth work. Alex has provided invaluable pro bono communications and media advice to The Salvation Army for 37 years. Both recipients committed to continuing their support. 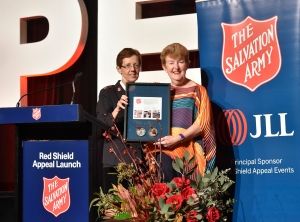 Salvation Army territorial leaders Commissioners Floyd and Tracey Tidd concluded the launch by praising God and thanking all who partner with The Salvation Army to raise the needed $79 million target of the Red Shield Appeal.

While the Red Shield Appeal is open until the end of June the main weekend for collections is 25-26 May.

Earlier in the week, the Federal Minister for Immigration, Citizenship and Multicultural Affairs David Cameron was the keynote speaker at the Red Shield Appeal Multicultural Media Launch at Leichhardt in Sydney.

He emphasised the key part that The Salvation Army and the multicultural communities together play in providing care and assistance to those who are most vulnerable. A wide variety of multicultural media attended and committed to publicising the Red Shield Appeal.

Queensland launched the Red Shield appeal in Rockhampton, Ipswich, Bundaberg and Hervey Bay this week, while Canberra, in the Australian Capital Territory, held its launch yesterday.