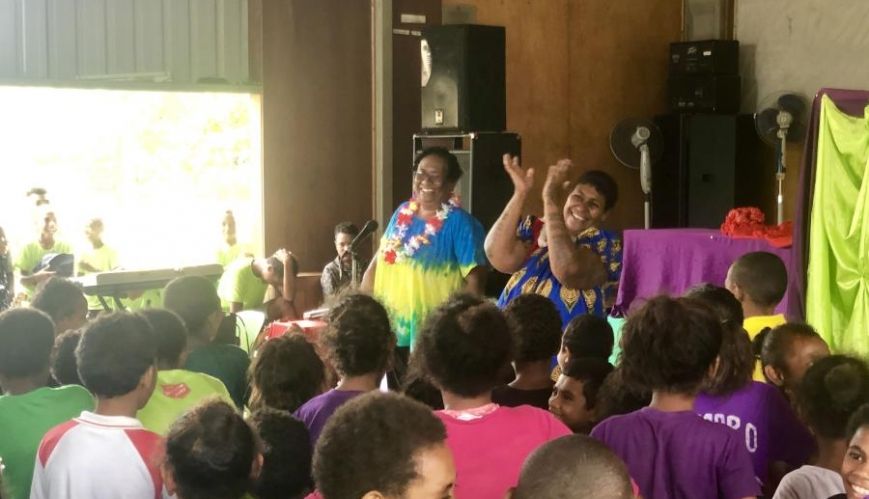 A Salvation Army divisional young people’s camp that attracts more than 600 participants would be mind-blowing in a country like Australia. In Papua New Guinea, it’s a regular occurrence.

Some of the young people came from Kobarouka village – the division’s most remote corps located on top of the Owen Stanley mountain range, not all that far from the Kokoda Track. They walked for nearly three hours just to get to a main road where they were transported to the event.

The camp included worship, Bible teaching and entertainment meetings where each corps showcased their talents. Education and training sessions were also held on topics such as child protection and juvenile justice.

The guest speaker, Colonel Julie Alley (Territorial President of Women’s Ministries), said the passion of the young people at the camp is replicated throughout the territory, with more and more young people wanting to make a commitment to God and The Salvation Army.

“They enjoy coming together for camps like this,” Colonel Alley said. “They do not have much in the way of material things and so still enjoy the simple things in life. They rely upon God for everything – their food, their clothing, their health and their lives.”

Colonel Alley said the biggest challenge was trying to source funding for camps such as this, as well as the remoteness of the locations from where the young people have to travel. “They have to pay for their transport to come and also to get home again. We try to give them some small supplies of food for the weekend, but they also look after themselves for the cooking.”

On the same weekend, a youth prayer retreat was being held in the village of Gaire, closer to Port Moresby. Despite heavy rain and flash flooding causing delays on the roads, several hundred young people and youth leaders gathered under makeshift shelters outside the corps building, which was being used to accommodate campers (others slept in tents underneath the raised corps building, or elsewhere on the property.)

The rain cut electricity, causing the event to start three hours later than planned. While waiting, the youth and young adults sang worship songs in the dimness of the few lights running from the back-up generator. The electricity came back on at 9pm to the delight of those attending, and the three-hour meeting of prayer and worship began. Despite finishing at midnight, the young people all rose at 4am to continue in prayer and worship.

Colonel Kelvin Alley, the Territorial Commander, says the passion Salvationists across the territory have to worship Jesus is inspiring.

“My own life has been changed forever because of the privilege I have had to live and serve alongside these people,” he said.

The faithfulness and devotion of our Salvationists is life changing. They live such sacrificial lives, and yet are uncomplaining, grateful for small mercies, and heavily reliant on the grace of God for their daily needs and provisions.

“The majority of our officers live and serve in locations where there is no running water, no power, no vehicle to drive, and often no floorboards for the house. But there are also no complaints. The example set by their lives is completely humbling.”

Papua New Guinea is a three-hour plane journey from Brisbane. It’s closer to Australia’s eastern states than Perth. Yet the difference in culture and living conditions is stark.

The people of PNG mostly live a subsistence life and have very little material things,” said Colonel Julie Alley. “This means that they rely on God for everything. This is a huge lesson to learn, as many people in other countries can afford to pay for their food, clothing, rent, doctor's bills, medicines, etc. Here, they live by faith – and most cases – by faith alone.

“Living in a country like Papua New Guinea certainly teaches us once again to live life on our knees, constantly praying for God’s protection and provision. We learn so much from our brothers and sisters here.”