Volunteers bringing hope one haircut at a time 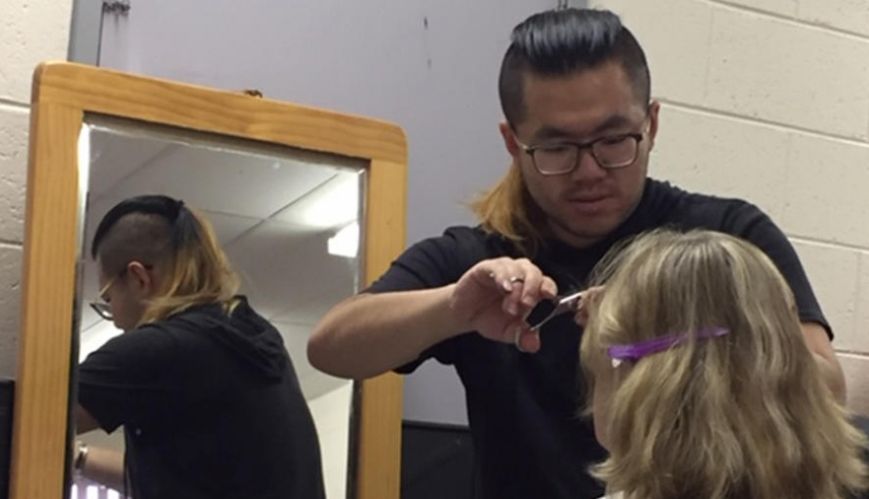 Volunteers bringing hope one haircut at a time

Hairdressing volunteer Benny cuts the hair of ‘client’ at the Salvo Sunday Dinner at Hobart Corps.

Two Hobart hairdressers are bringing hope to some of the city’s most vulnerable people through a simple haircut.

Both hairdressers volunteer their time at The Salvation Army, one at the Salvo Sunday Dinner at Hobart Corps every second week and the other at McCombe House emergency accommodation service once a month.

Benny is the hairdresser who donates his scissor skills at the Salvo Sunday Dinner. He approached the Hobart Corps with the idea last year after witnessing similar acts of kindness in Taiwan, where he trained.

“In Taiwan it is a strong belief that every person, regardless of their circumstances, can do something to help another person … every little kind act can have a big impact,” Benny said.

The three-course dinner for the community, starting at 4pm, feeds an average of 50 people every week. Benny gives an average of four haircuts each time – everything from a trim, tidying up a beard, or a complete restyle.

Major Angela Watson, who helps facilitate the dinners with Hobart Corps Officers Captains Johnmark and Nicole Snead, said Benny had become a popular addition to the Sunday afternoon event, restore dignity to many.

“Getting a haircut wouldn’t be a top priority for people who are struggling to make ends meet, or are living on the streets. It would be seen as a luxury or possibly as unnecessary due to their circumstances,” Major Watson said.

“Another major need of the clients who have a haircut is for their meal to be kept for them so they don’t miss out!” she laughed.

A similar initiative began at McCombe House last year when another hairdresser offered her services to the women and children seeking safety from domestic violence. She sets up a makeshift salon in the cubby playspace, and can give up to five people haircuts during her monthly visits.

As chaplain of McCombe House, Major Watson has seen a dramatic lift in clients’ self esteem. The hairdresser has at times provided a full makeover.

“On our last hairdresser day, one client entered the ‘salon’ despondent and almost reluctant. Her ex-partner had hacked off her hair. This was a cause of shame and embarrassment for the woman,” said Major Watson.

“The client left with her head held high and a smile on her face. We’ve observed that since the haircut the woman has become more positive in her outlook and more engaged in the process of finding accommodation. The haircut has given this woman hope.”

Whether hope looks like a warm meal, a listening ear, or even a haircut, Salvos in Tasmania know that living out the mission of the Army can take many forms. By partnering with the community, different mission expressions are filling the need in Tasmania. In the past month, two more hairdressers have contacted The Salvation Army to donate their services.

“Local volunteers like Benny means that The Salvation Army is able to have a greater impact in the community,” said Major Watson.

“This is ‘working alongside others’ to transform Hobart through one haircut at a time!”