The centre in Brunswick will now be able to implement a new program enabling people seeking asylum on bridging visas to up-skill and find employment.

The grant is part of the Innovation Funding initiative that was announced by Commissioner Floyd Tidd at the launch of the Australia Territory in Melbourne late last year. So far, 70 corps and mission expressions across Australia have received grants. 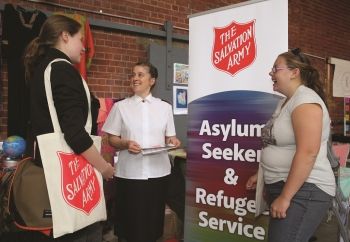 The grant awarded to the Brunswick social service, in partnership with Dandenong Corps, will fund a pilot program, E-Plus Local, enabling people seeking asylum on bridging visas to up-skill and find employment.

“[The program will teach them] how to write resumes, how to do your own online profile, how to write a job application, role plays for interviewing – all those type of nuts and bolts skills,” said Major Karen Elkington, the Asylum Seeker and Refugee Service centre manager.

Based on a similar program at Auburn Corps in Sydney, E-Plus Local will provide an employee with the ability to oversee volunteers and work with clients on a case-by-case basis.

“It’s anticipated that the employment consultant will have another 30 people and will do one-on-one intensive employment casework. They will knock on doors and advocate strongly for our clients,” Major Elkington said.

The centre supports 500 clients directly each year, with an additional 2000 people benefitting from their services.

The centre is partnering with several other bodies in providing the asylum centre service.

By partnering with Dandenong Corps through the Innovation Funding, Major Elkington said the centre would reach more clients. On average, nationally, more than 80 per cent of job seekers who are refugees and asylum seekers struggle to find work.

Situated in Melbourne’s thriving south-east, the city of Greater Dandenong is one of the most culturally diverse community in Australia and home to more than 2000 asylum seekers and refugees. This makes up nearly 25 per cent of the total population of refugees and asylum seekers living in Victoria.

The Salvation Army is also partnering with Deakin University’s new Centre for Refugee Employment, Advocacy, Training and Education. This will enable Masters students to do casework with clients who already have educational credentials and business experience, giving the centre in Brunswick a multi-dimensional approach to their services.

And an informal partnership with Temple Beth Israel Synagogue in St Kilda means volunteers can further implement the program by teaching ESL (English as a Second Language), assisting people seeking asylum to find work for the first time in Australia.

“Clients are coming in for emergency relief – food and other basic supports because they don’t have work. And now our volunteers and workers are saying, ‘We have this employment program starting in the future, would you like to be involved?’ And they’re saying, ‘Absolutely!’” Major Elkington said.

After funding was cut in April 2018, the centre worked closely with The Salvation Army research, social justice and policy department to advocate for the marginalised people group. The Innovation Funding grant will now enable the Brunswick centre to help clients at the coalface.