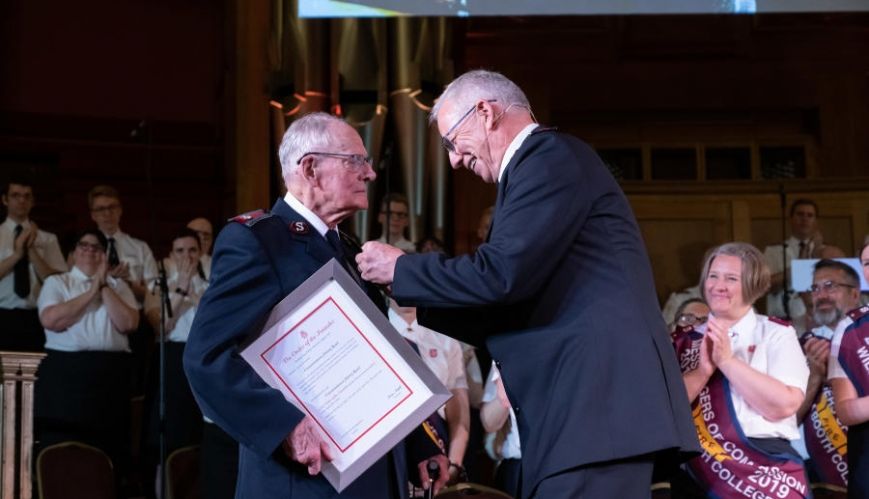 General Brian Peddle has admitted 95-year-old Commissioner Harry Read to the Order of the Founder, The Salvation Army’s highest honour, during commissioning celebrations for the Messengers of Compassion session in the United Kingdom Territory with the Republic of Ireland.

A video about Commissioner Read recalled his World War Two service, for which in 2016 he was made a Chevalier (knight) of the Légion d’honneur – the highest French order of merit – and detailed his lifetime of international service as a Salvation Army officer.

The video also showed the commissioner’s recent skydive to commemorate the 75th anniversary of the D-Day landings (see video below) and his meeting with a German D-Day veteran, who he told: “We are brothers.”

Commissioner Read, who – like the audience – clearly knew nothing about the award in advance, made his way to the platform where he saluted the General and acknowledged the congregation, which had risen to its feet in enthusiastic applause and remained standing throughout the presentation.

The General read the citation, which stated that Commissioner Read was admitted to the Order of the Founder “in recognition of a life of outstanding Christian witness in word, verse and deed spanning 75 years, with a recent and relevant witness through social media captivating a global audience with the authentic message of reconciliation, hope and peace”.

He then admitted Commissioner Read to the Order of the Founder and directed that his name be inscribed on the roll of the order, dated 6 July 2019.

“I count it a great privilege and honour to be made a member of the Order of the Founder,” responded Commissioner Read. “I’ve enjoyed life so much. I’ve lived a full life ... and I’m grateful for all the love and support that has come my way over recent years.

“I’m grateful to you for the honour you have afforded me. Thank you so very much indeed, General.”

The Order of the Founder was instituted by General Bramwell Booth in 1917 to mark “outstanding service rendered by officers and soldiers such as would in spirit or achievement have been specially commended by the Founder”.