Brisbane's historical meeting in harmony with the past Brisbane's historical meeting in harmony with the past

Four female singers who were part of the 1960’s Salvation Army pop music group Harmony 4 plus 4 recently reunited to perform pieces they had sung 50 years earlier.

Their presentation was part of a celebration of the group, led by Barry Moore, at a recent meeting of The Salvation Army Historical Society, Brisbane Chapter. 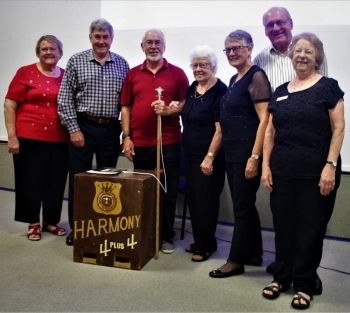 Historical photos of the group, sound recordings and moving images were also part of the celebration.

Half of the group comprised the Moore family, which included husband and wife Eric and Dorothy Moore and their sons Raymond and Barry.

In the 1960s, Harmony 4 plus 4 held concerts and also participated in meetings and open-air services. They performed at Parramatta, Campsie and recorded a session for the Christian Broadcasting Association in Sydney.

In Melbourne, they played at Hawthorn, Geelong, Box Hill, in the Plaza of the Southern Cross Hotel, appeared on the television programs Time for Terry, In Melbourne Tonight and played at Swinburne College.

The group also performed alongside the Melbourne Staff Band and pop sensations such as Col Joy and Little Pattie.

Garth Hentzschel is the President of The Salvation Army Historical Society, Brisbane Chapter.