A Gospel Christmas is the latest in a long line of events the Salvo Bigband have featured in since its inception 10 years ago.

Dust off your Santa hats and get ready for a swinging good time – the Salvo Bigband is hosting A Gospel Christmas at Federation Square in Melbourne on 7 December, and they want local Salvos to join them.

The event, organised by the Salvo Bigband, will include performances from Emily Williams of the Young Divas and Justin Michael of Compliments of Gus. Melbourne Contemporary Gospel Choir (pictured below), headed by Jason Simmons of Moreland Salvos, will partner to lead Christmas carols.

“The Salvo Bigband believes that a public Christmas event in the heart of Melbourne is the perfect way to share the joy, peace and hope that Christ offered the world through celebrating his birth,” said worship leader Perri Winter-Barry. 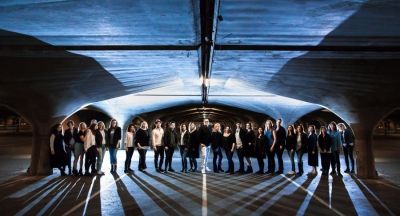 An interactive, live nativity will be available for passers-by, as well as face painting – and rumour has it that Santa may even make an appearance.

“Music not only draws a crowd but unifies us quite literally through singing together. A Gospel Christmas will give people the opportunity to come together to glorify Christ, create community and celebrate with song,” said Perri.

Admission is free, so if you live locally, pack a picnic basket, bring a deck chair, and head down to Federation Square in Melbourne on 7 December from 4-6pm. The Salvo Bigband can’t wait to see you there, as they share the true meaning of Christmas with one of Australia’s most diverse cities.

A Gospel Christmas is the latest in a long line of events the Salvo Bigband has featured in since its inception 10 years ago. Their contemporary style of music matched with the Gospel message has allowed them to tour Sydney, Brisbane, country Victoria and Melbourne, as well as overseas visits to Korea and Sweden.

For more information visit the Salvo Bigband on Facebook and at SalvoBigband.com.