Supermarket Salvos to the rescue! Supermarket Salvos to the rescue!

By Darryl Whitecross with additional reporting from Simone Worthing

In the midst of the pandemic that is the COVID-19 scare, Salvationist volunteers across the country are doing what Salvos do in a time of crisis – roll up their sleeves and head to the front line to do whatever they can to ease the burden to those in the line of fire.

This time, it is helping Woolworths support its elderly and disabled customers during the early restricted opening hours at the Australian supermarket chain.

Woolworths announced that from Tuesday 17 March until at least Friday 20 March it would give the elderly and those with a disability a 60-minute window from 7am to shop freely, as its managing director Claire Peters said in a statement, “in a less-crowded environment”. Uniformed Salvos have been invited to assist by getting groceries back to people’s cars, pushing a trolley, or in other practical ways including reaching up and getting items that are high on shelves and putting the packed bags at the checkouts into trolleys.

Woolworths called on The Salvation Army to make “official” the initiative after it learnt that some Salvationists had taken it upon themselves to go to their local Woolworths supermarket to offer to assist elderly and disabled customers.

NSW/ACT Divisional Commander Lieutenant-Colonel Miriam Gluyas said this was a great way The Salvation Army could assist in the crisis. “I am so proud of our people in doing this.”

“This gesture of kindness is truly appreciated, and we are very grateful to all our friends at The Salvation Army. It’s these little things that can really make someone’s day,” Ms Arrastia said.

In NSW Central West, Major Mark Williamson, chaplain at the Army’s aged care facility at Moyne, Canowindra, and Associate Corps Officer at Cowra, was one of the first to get involved, turning up at 7am on Tuesday at the small Cowra supermarket.

He said that when he told the staff that he was there to offer to help anyone who needed assistance in any practical way, they were grateful.

The next day, he turned up armed with some A3 signs he’d made and laminated – complete with The Salvation Army Red Shield logo and hung them on the fences indicating help was available shoppers needed his assistance.

Mark said that, with so much panic buying happening across the supermarket landscape, people with tighter incomes were feeling the pinch as many of the ‘no-name’ brand items they usually bought were not available, so they had to buy the more expensive brands which meant their shopping dollar did not go as far as it usually did. 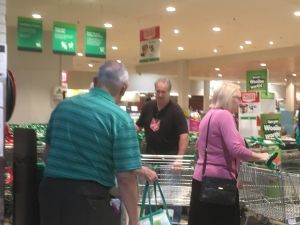 On the NSW Mid-North Coast, Port Macquarie Corps Officer Major Heather Unicomb said The Salvation Army presence at the supermarket there had a “calming effect” on shoppers as her husband Kevin manned the trolley bay at the entrance to the store, handing out the trolleys.

Heather said that when her team of eight arrived to provide support to shoppers, “it was crazy. There were people everywhere.”

She said that many people commented that Kevin having a trolley ready for them created a sense of calm as the crowds entered the store. “It was great having a happy, calming person at the point of entry,” a shopper said.

Port Macquarie Corps is assisting at the supermarket in the city and at Lake Cathie where corps folk Warren and Glenys McKeon are helping out.

Captain Kimberley Featherston, Youth and Young Adults Secretary for Victoria, said that as well as the physical support for customers and staff out at the Blackburn North store in Melbourne, being able to provide a listening ear to customers and staff alike was an unexpected benefit.

Before the store opened on Wednesday, she and her team walked up and down the long queue at the entrance finding out what assistance shoppers would want once they got into the store – particularly those who were there without their carers.

“There were many unstable walkers, so we were able to get them a trolley, which helped them with their balance,” Kimberley said.

She said it was good to be able to spend time listening to the staff, several of whom said they had been abused all week by customers angered by empty shelves or not being able to buy the items they wanted.

“Some customers said they didn’t want any help right now (with their shopping) but a phone call during the week would be helpful,” Kimberley said.

The ripple effect of the shortage of food on supermarkets shelves around the country is being felt by Salvation Army services such as the Asylum Seeker and Refugee Service in the Melbourne suburb of Brunswick.

The service manager, Major Karen Elkington, said clients desperate for food were coming into the service for help.

“They can’t find food anywhere in the supermarkets, so they come to us for help, as the only ‘family’ they have here. They have nowhere else to go,” Karen said.

“The clients are stressed and frightened. They don’t have the cash to buy in bulk and are just after some basic items from which they can make simple meals,” she said.

It is not only the supermarkets short on food. Even stocks in the pantry at the Asylum Seeker and Refugee Service are dwindling.

“Thankfully we still have some food left and this week we had two people from the public come in with sizeable boxes of food to donate to us,” Karen said.

* Any Salvo interested in being part of the ministry and mission opportunity at Woolworths supermarkets around the country is encouraged to help out in this way as long as they wear uniform and speak with the manager of the supermarket before doing anything.