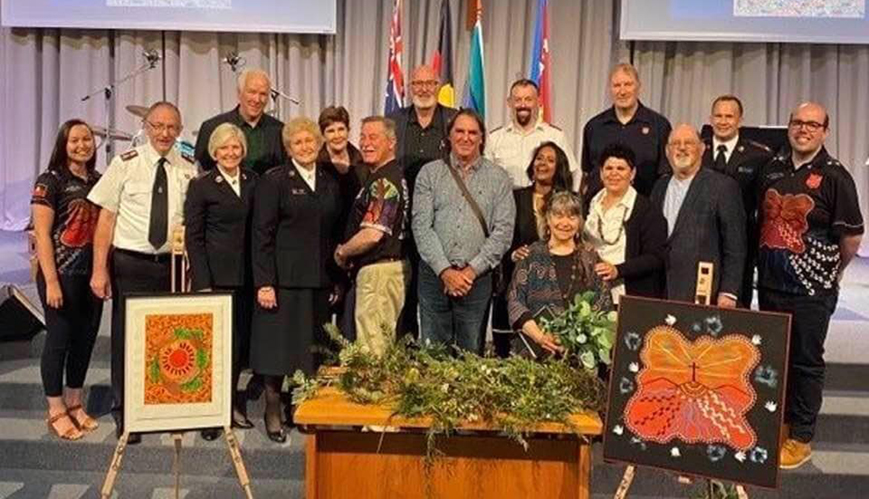 Members of Tasmania’s Indigenous community have taken part in launching The Salvation Army Reconciliation Action Plan for the Tasmania Division.

The plan essentially solidifies The Salvation Army’s commitment to walk alongside the Indigenous peoples of this land.

Under the leadership of Grant Herring, project manager for The Salvation Army, the plan was developed over 18 months with input from local Indigenous communities and Reconciliation Tasmania.

The key intents of the plan are to:

• build relationships with Indigenous people, listening to their voice and input;

• cultivate actions that relate to cultural understanding and recognition;

• enact opportunities around employment outcomes and governance; and 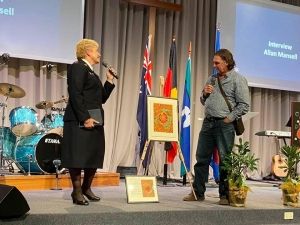 Captain Kim Haworth (Divisional Commander) interviews artist Alan Mansell about his artworks that were commissioned for the launch of the Reconciliation Action Plan.

“We need to be courageous, we need strong champions within to drive it and also be open to the advice and influences of strong Aboriginal and Torres Strait Islander community people –  people who can sit at the table with us to share challenges and give us valuable insights that give us an opportunity to grow and to also sit with us to share our successes,” she said.

“The good news is we don’t have to resign ourselves to the status quo any longer or do it alone; we have renewed possibilities and hope for a fresh start with the commitment from all sides to strengthening existing relationships and developing new ways of being in relationships with our Indigenous peoples across Tasmania.”

Major Brad Watson, Public Relations Secretary for Tasmania, helped form the division’s plan and said this was a step towards acknowledging the historical mistreatment of Indigenous peoples in Tasmania.

“It’s significant for The Salvation Army to say that we recognise the truths, injustices and the historical nightmare that is Australia’s [treatment towards Aboriginal peoples],” he said.

“We recognise there are Indigenous people in Tasmania who have a voice. It’s important that we act out our values of integrity and compassion. We want to be a people of reconciliation and peace, as we are taught in the Gospels.”

At the service, Palawa Aboriginal elder Auntie Kris Schaffer welcomed the congregation to Muwinina Country and provided teaching about some of the local flora of the Muwinina (Big River) people that lived by the Derwent River and Kunanyi/Mt Wellington.

A commissioned painting was unveiled by local Aboriginal artist Alan Mansell, who spoke about his own reconciliation with The Salvation Army after being in the organisation’s care as a child.

Tasmania was the second colonial settlement in Australia, where history records that the British military and convicts enacted genocide towards at least nine known Indigenous people groups in the state from 1803. It is estimated that by the mid-1830s, only 400 Indigenous people were left, and they were exiled to outlying islands where many later died.

Tasmania is the first Salvation Army division to enact a Reconciliation Action Plan since the inauguration of the Australia Territory. The Salvation Army has committed to developing a national plan with the hope of launching it either later this year or early next year.