The Waterhole a haven for community thirsty for connection The Waterhole a haven for community thirsty for connection

Emma Nelson hangs some washing on the line at The Waterhole in Alice Springs.

Cultural sensitivity is the foundation stone of the community when living in places such as Alice Springs in the heart of Australia.

This is what Captains Dean and Rhonda Clutterbuck have quickly learnt since being appointed as corps officers there at the beginning of this year.

Having moved from Tamworth, the country music capital of Australia, to ‘The Alice’, the Clutterbucks are quickly discovering where Christian theology meets the deep spiritual sensitivity that Australia’s Indigenous population embodies.

One place this is seen is at The Waterhole – located next door to the heritage-listed Alice Springs corps and administration building – which has become a significant and safe meeting place for many people in Alice Springs since 2012.

Rhonda said The Waterhole was like a drop-in community centre where each day between 50 and 80 homeless men, women and young children – mostly women – go to shower, do their washing, catch up with family, cook, eat, sleep, sit, use a computer and phone or play music. 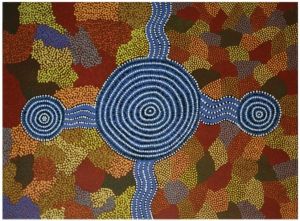 The Waterhole logo, painted by Sonia Daniels in 2012. The painting hangs in The Salvation Army-run centre.

“It’s a safe place for people to come and they’re not hassled by anyone because they’re not congregating en masse out the front of shopping centres etc.,” Rhonda said.

“It is not always safe for homeless women to sleep out at night – so these women might spend the whole time they are here sleeping [there are mattresses available].”

COVID-19 restrictions have reduced the number of people using the centre [currently open only three hours a day], which has impacted the thriving art program.

“Most people are back out in community having heeded the warnings to get out of town. It’s definitely a lot quieter,” Rhonda said.

The artists – again mostly women – usually produce many pieces for the peak tourist period, which is around this time of year. Rhonda said that, for several weeks leading up to cooler months of the year when the tourists came, the artists were prolific in their output.

“They do not have anywhere to store their work, so they wait just until people start arriving on the planes and trains and buses,” she said. “At the moment, it’s a struggle for them because there are no tourists.”

Despite the stereotypical view of a homeless person being dirty and unhygienic, for the people in Alice Springs hygiene and presentation were important.

“These people take pride in themselves,” Rhonda said. “They want to be clean. They want to wash their clothes. They still like to look presentable. Here, the people want to feel like people. They don’t let their circumstances dictate that they have to live a certain way.”

The facilities at The Waterhole are run down. The amenities block has four showers and four toilets at one end and two disabled toilets and showers in another area. Rhonda said the men and women had been showering in the same area, which was not culturally sensitive, so that had been re-organised.

“The men have been good and they respect that’s the ladies’ space,” she said. “Our facilities are not appropriate for the amount of people we have coming through. The Making it Happen money [a territorial women’s fundraising campaign] is to upgrade the facilities to give the women more dignity. The laundry is dark and it’s very hot and there is a plan to change it along with plans to have an outdoor kitchen with electric barbecues.” 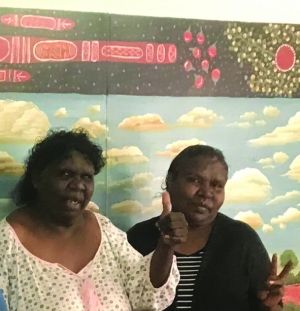 Meg Fry (left) and Isabella give the thumbs up to being able to use the facilities at The Waterhole in Alice Springs.

Rhonda said many of the women who used The Waterhole liked to cook their own food “but there is only so much a microwave oven can do ... they like to bring in their own kangaroo tail, but it doesn’t smell good in the microwave.”

She said The Waterhole was great for connection between the church and community.

“Across the road is a park where a lot of our people live most of the time so then all they have to do is come across the road,” Rhonda said. “A lot of people know about Jesus, but it’s not a lot about telling people about him – it’s about deepening that journey with them because they have a mixture of their Christian faith as well as the indigenous spiritual beliefs. I don’t think we’ll ever be able to untangle the two.

“Aboriginal people here in the Red Centre haven’t had contact with white people as long as those in coastal areas so they’re fairly traditional here.”

Rhonda said about 80 per cent of the corps congregation was Indigenous and, while they kept most of their concerns and issues private, rarely preferring to speak of them, many were quick to ask for prayer, particularly for safety, health, anger issues, family and housing.

“So, it’s about continuing the journey with them and modelling that this place is a Christian place and not accepting some of the outside behaviour that can sometimes creep in – and treating people how they should be treated in Christ because a lot of them have it tough,” Rhonda said.

“They’re a very peaceful sort of mob here. They sound loud and aggressive outside because they are very loud in their conversation and they yell ... but, what can sound aggressive isn't, and when you talk to someone about deeper matters, they’re quieter. They don’t want everyone to hear so they don’t often share in church, but they share in The Waterhole. They believe in the power of prayer.”

Women across The Salvation Army Australia Territory, through the Making it Happen campaign, are helping to support The Waterhole.

Commissioner Janine Donaldson, Territorial President of Women’s Ministries, said that some of the Making it Happen project money raised this year would be used “to improve the cultural sensitivity of existing facilities” at The Waterhole, which included the renovation of the shower block.

Janine said some of the money also would be put into the development of national empowerment programs and activities for Aboriginal and Torres Strait Islander women affected by incarceration, whether that be family members or women who have been jailed. 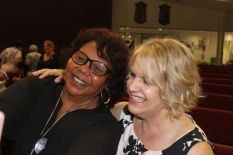 Commissioner Janine Donaldson and Aunty Esme at the Captivated women’s conference in Brisbane earlier this year.

Over the past 10 years, Making it Happen has raised more than $600,000 through its project ministry across the country through various women’s events and conferences to support women in Australia, but much of it is sent around the world to help make a difference for people living in poverty and despair in developing countries.

Janine said that, last year, more than $100,000 was raised for the Women of Worth project, which put the project well on the way to reaching its commitment of $150,000 in support.

“Those valuable funds will be used by Salvation Army International Development to support women in Africa to develop literacy and numeracy skills, save money and access credit,” Janine said.

Over the past two years, Making it Happen has been supporting the Indonesian Territory to fund much-needed renovations at the Young Women’s Hostel in Bandung, which houses up to 25 women. The target for the project is $135,000.

The hostel, to be known as the Eva Burrows Women’s Hostel, will accommodate up to 30 women in a healthy environment that promotes the wellbeing of the residents.

Indonesia has many homes for children but, once the girls reach university age, they are no longer allowed to stay in such accommodation and are most often left with nowhere to live.

The Bandung hostel gives young women a safe place to stay as they go to university or get jobs; areas where women still are disenfranchised.