Salvos step up after cyclone in the Solomons Salvos step up after cyclone in the Solomons

The Salvation Army in the Solomon Islands has delivered vital supplies to farmers affected by Cyclone Harold who had run out of food and could not make an income. 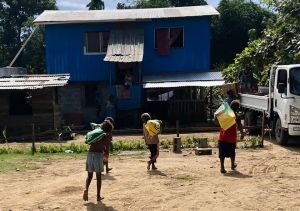 Communities in the Burns Creek area of Honiara have been assisted with food supplies following Cyclone Harold.

Major Robert Evans, Solomon Islands District Officer, said Cyclone Harold had a larger impact on the island nation of Vanuatu, which captured worldwide attention, but coastal and river mouth communities of Honiara were also affected, with crops and livelihoods destroyed.

Those losses were exacerbated by the COVID-19 State of Public Emergency, which shut down the satellite markets outside of the city centre and cut off the primary income source for many of those communities already affected.

Following the initial emergency response, The Salvation Army received a request for assistance from community leaders at Burns Creek in East Honiara, who lost food crops and had seen families become desperate.

“We decided to respond to the Burns Creek leaders’ call for help to bridge an apparent gap in assistance to this community,” said Robert. “We also saw it as an opportunity to lay the foundation for future ministry in a community where the corps officer at Honiara is already very active.”

The Army applied for a Rapid Response Grant through The Salvation Army International Emergency Services (IES). It also received an unexpected donation from The Obed Centre, a Tasmanian Christian group, through a connection made by Major Stephen Miller, the corps officer at Kingborough/Huon.

“We used the Obed donation to purchase 3500 cassava stems to help re-plant lost food crops, and the IES grant to purchase rice and tuna to provide food relief over three weeks while the crops are being replanted,” said Robert. “Solrice and Soltuna contributed to this assistance by donated some stock towards our overall assistance.” 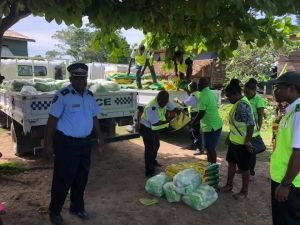 The Salvation Army in the Solomon Islands has a strong relationship with the Royal Solomon Islands Police Force (RSIPF) after providing emergency services catering for them during the country’s national general election in 2019. To strengthen that tie, The Salvation Army invited the RSIPF Crime Prevention Department to partner in the relief project by donating the use of two three-tonne trucks to help distribute the food. Members of the department also attended the distribution and conducted crime prevention talks in each community as The Salvation Army distributed the relief.

“The presence of the police was very helpful to present a positive community policing and partnership in a community that has a history of high crime and social unrest, especially during times of crisis. We wanted this relief effort to support the RSIPF in preventing crimes of desperation,” said Robert.

Superintendent Solomon Sisimia, Director of the Crime Prevention Department, wrote a letter of thanks to The Salvation Army after the event, saying, “The deliveries has come [sic] with a total surprise and appreciation to the Burns Creek communities.

In his response speech, Chief Sam Baega emotionally gave his address as a new dawn of partnership with the RSIPF, The Salvation Army and others who are partners to the endeavour: “We thought that no institutions will support us at this time of crises, but thank God The Salvation Army has not let us down but taken the initiative and make things happen.’”

The Salvation Army will repeat the distribution once a week for the next two weeks to ensure that each of the 16 communities receives enough food to feed their families while new crops are grown.