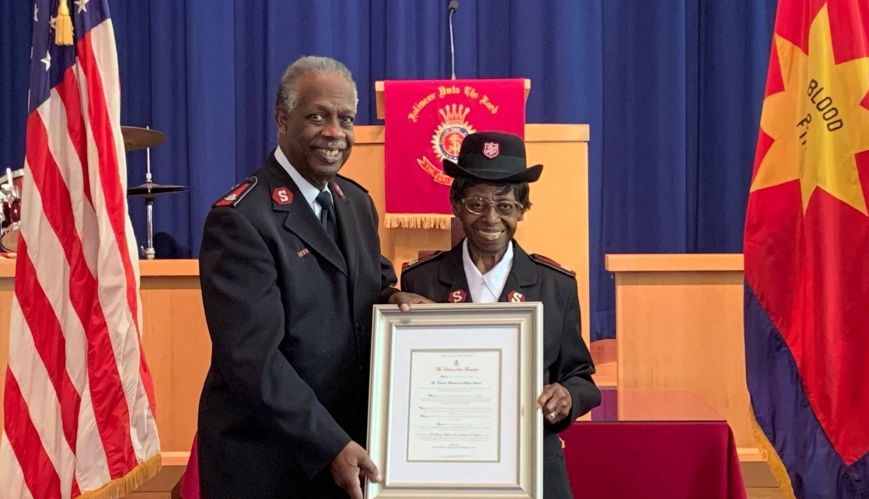 Lieutenant-Colonels Abe and Louise Johnson with their Order of the Founder award.

The Salvation Army’s highest honour, the Order of the Founder, was awarded last month to Lieutenant-Colonels Abe and Louise Johnson, of the USA Eastern Territory.

Approved back in October 2019, the award was due to be presented by General Brian Peddle at a territorial congress in June, but for the global pandemic. Instead, General Peddle congratulated the Johnsons from International Headquarters.

“Lieut-Colonels Johnson are pioneering officers, with a long, effective, and distinguished service for God and his Kingdom,” wrote General Peddle. “They were the first African American officers to be promoted to the rank of lieutenant-colonel, built a brand-new corps building in Harlem, NYC, the largest in the world at that time, and were actively engaged in the front-line post-9/11 service.

“This unique couple has been instrumental in raising awareness and sensitivity to issues of race equality and inclusion and are promoters and models of diversity, empowerment, education and reconciliation.

“Lieut-Colonels Johnson have received awards in the past to recognise their service, achievements and empowerment of others. It is only fitting that such exceptional officers are duly recognised by receiving the highest honour The Salvation Army can bestow upon them.”