BLOBS back on the breakfast menu at Townsville 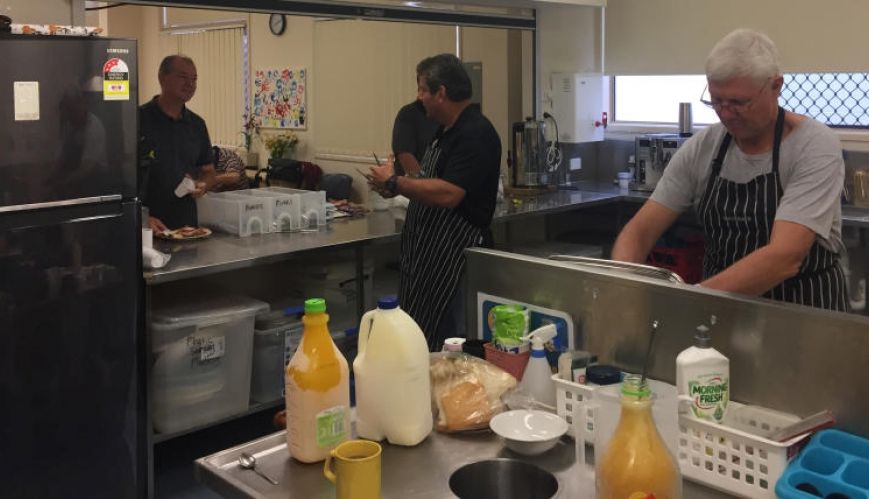 BLOBS back on the breakfast menu at Townsville

How do you like your eggs? The kitchen is abuzz at the relaunch of Townsville Corps’ BLOBS men’s ministry event.

The COVID-19 outbreak in Australia forced the temporary shutdown of the monthly Saturday morning ‘BLOBS’ get-together at Townsville Faithworks Corps – the first time in its 20-year-plus history – but now it’s back.

BLOBS (Blokes Loving Our Breakfasts) has been a well-oiled men’s ministry machine for the majority of that 20 years with most of the organising team having done the same jobs for many years.

Lieutenant Perry Lithgow, Corps Officer, said the BLOBS breakfast of bacon and eggs, toast, cereal and a hot beverage was open to all blokes – whether from the corps, other church congregations or beyond. Regulars often invite friends or work colleagues, and other blokes who have formed a connection with the corps also attend.

One of the blokes behind the ministry since its inception, former corps sergeant major Bob Down, said he invited members of his running group as well as people he rubbed shoulders with daily in his role as a courts and prisons chaplain.

“It’s really something Bob is passionate about,” Perry said. Without further ado, coordinator Bob Down relaunches the BLOBS men’s group with support from Ron Carbis and the guest speaker on this occasion, former policeman Dave Findlay.

The backbone of the BLOBS group is the cooking crew – Dale the Baconman, Allan the Eggman and Bob the Toastman. Perry said each month it was Dale Gibbs’ job to cook the bacon, Allan Collins’ job to cook the eggs and Bob Down always did the toast.

“They have very particular roles that they play in the preparation and know their role and they stick to it. They have a very set way of doing it,” Perry said – which is the reason BLOBS was chosen as the first group to restart when the government announced groups of 20 were allowed to gather. The BLOBS gathering regularly attracts about 20 blokes.

Bob said BLOBS was an important link to the community and a great way for men to gather. It’s $5 for the breakfast but, “if you can’t pay it doesn’t matter. It is more important for you to attend,” Bob said.

Men who had been reached through the corps’ Doorways program – a national initiative that provides emergency relief and holistic case management – attend along with members of the running club of which he is a part.

There is a female presence but only occasionally. With his tongue firmly planted in his cheek, Perry said that BLOBS was a men’s ministry activity specifically for men but, occasionally, the group “might make allowances” for women to attend.

“For example, on Saturday we had a lady come along because we’ve got a young guy who’s got autism and he brings his carer. It can’t always be a male carer so we make an exception and, once a year, around Mother’s Day, they’ll allow a guest speaker to come to talk about motherhood,” Perry said.

He said COVID-19 restrictions forced the BLOBS gathering to be put on ice over the past four months, but the corps was keen for it to be one of the first activities to restart. This was because it was the easiest to organise and the average attendance met the numbers allowed to congregate at that time. 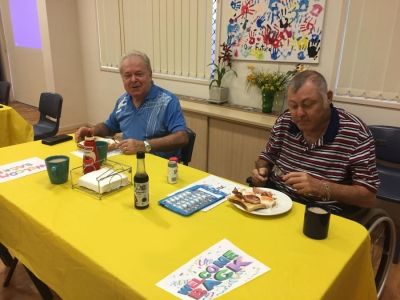 Back for breakfast – Franz Linzmeyer and Darryl Wells tuck into their bacon and eggs on toast.

However, he said the corps needed to cap at 20 those who attended the relaunch and RSVPs were required – the first time he could remember. “Normally, we would have under 20 attend but, this time, we actually had to knock some people back because we had the 20 limit (due to the COVID-19 restrictions the government had placed on people gathering),” Perry said.

“I think people are so keen to re-engage with something social and, even on the day, we were having to be careful, thinking that, if just some just turn up or whatever, one of us might have to step out and go so that we’re not reaching gatherings of over 20.”

BLOBS uses the same format each month – always bacon and eggs and a speaker. Perry said only once has the format departed from the bacon and eggs staple.

Perry said BLOBS had been addressed by a number of interesting speakers, from solicitors to retired policeman and Salvationists who have been on mission trips. “The corps officer has been the guest speaker twice,” he said.

For more information, go to salvationarmy.org.au/northqld/churches/townsville-faithworks/