The Salvation Army in South Australia has helped organise food and other resources for people housed in a quarantine camp for First Nations people displaced from their communities during the COVID-19 pandemic.

Port Augusta Corps Officer Major Gaye Day coordinated the deliveries, which involved one drop-off per week of enough food to feed each camper a continental breakfast each day.

The camp, established at Camp Willochra, near the town of Melrose, about 300km north of Adelaide, was set up in collaboration with native title holders as part of the three-month Protecting Our People (POP) project.

The project, funded by BHP with in-kind support from the three local Aboriginal communities – Kokatha, Barngarla and Kuyani – provided a remote and safe place for people from Aboriginal communities across South Australia and the Northern Territory who had been ‘stranded’ in Adelaide or Port Augusta because of COVID-19 movement restrictions to do the required 14-day quarantine period before returning to Country.

Gaye said project coordinators were originally calling for blankets: “We were able to provide some new ones.” 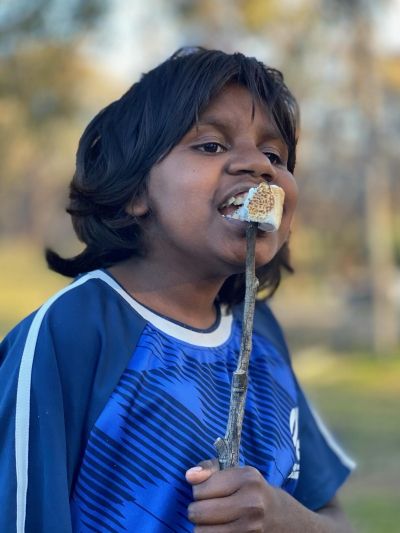 One of the children from Mimili in the APY Lands enjoys a toasted marshmallow in Camp Willochra.

She said that when the camp was set up in response to the COVID-19 lockdown in South Australia, the Army began providing breakfast supplies. “We order the food from Woolworths and a volunteer drops into our centre on a weekly basis to pick up the food to take out to the camp. This has been extremely helpful to those who are needing to isolate, and they really appreciate the assistance we have been able to provide.”

POP co-leader David Kelly said the initial project proved such a success that funding was released to run it for another three months. The campers were so impressed with the site and the experience that they affectionately called it ‘Camp Wiru’, which means ‘Camp Beautiful’.

David said the existence of the camp had not been promoted significantly, but word had spread to the point it was “over-subscribed with requests”. The Army, along with having provided all the breakfast meals, gave clothes and blankets. The camp provided traditional food for the other meals.

Kokatha elder Glen Wingfield said many people helped by the project had arrived with nothing other than the clothes on their back or little else. On arrival, each camper was given a supplies pack including bedding, clothes, toiletries and a drinking bottle. More than 250 people, including children, were helped in the first three months of the project.

As part of POP, organisers developed strategies to be put in place in the event of an outbreak of COVID-19 cases in Aboriginal communities.

She said another outcome of the project was that organisers were able to “train people from her mob”, as well as those from Kokatha and Kuyani, in project and business management, governance and other relevant skills. A mother and daughter from Mimili in the APY Lands share a close bond in Camp Willochra.

Kuyani elder Lavene Ngatokorua, another POP co-leader, said the camp had created a safe corridor for “our highly transient people”. “This was one of the most important projects that I’ve been involved with,” she said.

Lavene added that it educated the communities on the importance of hygiene and social distancing and the danger to them if they did not maintain. Ignoring the guidelines around preventing the spread of COVID-19, could have “devastating results” on the Aboriginal community,” she said.

Initially, the Army donated food to people inside the camp but as restrictions were eased, those donations have been made to people outside the camp, including Port Augusta itself.

Lavene said the camp was not a “structured environment”, as campers were free to move about, and due to social-distancing guidelines the camp only had two volunteer cooks onsite and another volunteer to run children’s activities.