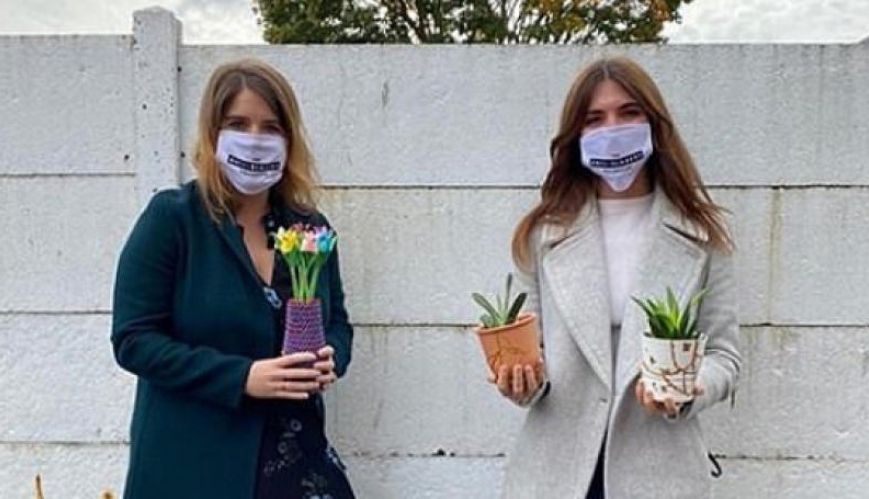 Princess Eugenie and her friend Julia de Boinville outside the safe house run by The Salvation Army in London with their gifts from the victims of modern slavery.

Queen Elizabeth’s granddaughter, Princess Eugenie, was “incredibly moved” when she visited a safe house in London run by The Salvation Army for victims of modern slavery.

Wearing a special-edition #WeAreNotForSale face mask to mark Anti-Slavery Day on 18 October and to practise social distancing, the princess spent time at the centre speaking with victims about their abuse from traffickers and slave labourers.

She was joined by her long-time friend from school days, Julia de Boinville, with whom she co-founded the charity Anti-Slavery Collective in 2017.

“Both our guests were incredibly moved by the courage of the survivors of modern slavery, who had endured up to decades of abuse,” said Major Kathy Betteridge, United Kingdom and Republic of Ireland Territory director of Anti Trafficking and Modern Slavery (ATMS).

Kathy said the two were presented with potted plants as a reminder of their visit. The pots were made for them by residents using the Japanese art of kintsugi, where broken pottery is repaired by mending cracks with gold or silver lacquer so that breakage and repair were displayed with pride rather than something to hide.

She said it was one of the many therapeutic activities that helped residents, particularly during “recent challenges” of COVID-19 lockdown and uncertainty. 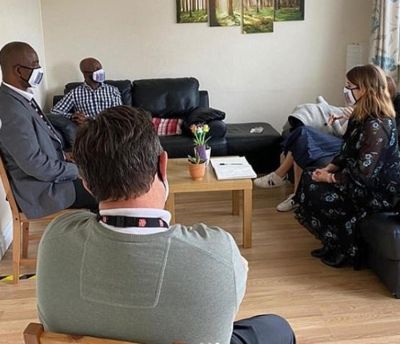 Princess Eugenie speaks with victims and staff at a safe house for survivors of human trafficking.

The territory’s ATMS head of operations, Emilie Martin, said the visit was “a tremendous boost” to residents and staff.

“Awareness and understanding are key to tackling modern slavery, so we are also delighted with the opportunity it provided to raise the profile of this important issue more widely,” Emilie said.

It was not the first time Eugenie had visited an Army safe house as she is a supporter of the Army’s campaign to stop human trafficking. She has appeared in Army anti-slavery video productions.

The 30-year-old princess has said that when she was much younger she had visited India with her parents where they met a group of women who had been rescued from having been trafficked and were being taught skills to help them return to a free workforce. She followed up that trip with a visit to an Army safe house.

In an interview published by the Army in 2016, Eugenie described modern slavery as “shocking” and that it was not something that happens “a million miles away” but “on our own doorstep”.

“I was completely astounded by the victims. These people were strong, happy. These girls really showed me how to grab life and appreciate things,” she said in that interview.

“I think raising awareness is such a huge part of modern slavery because no one knows it’s going on as much as it is. There are more slaves now than there were in William Wilberforce’s* time and I think it’s such a huge problem, but everyone can do their part to try and effect change. It’s definitely something that I’m going to shout about.”

* William Wilberforce was the leader of the movement to abolish the slave trade in the late 18th and early 19th century.