As a mum of three kids, Natalie Tanchevski is used to waiting. When she found herself last year, waiting at a Canberra Salvation Army hall for her daughter’s drama class to finish, she began to ask questions about the role she could play in the Army’s mission.

Knowing that families and individuals in need accessed the complex every week for assistance, she said, “I was just sitting there one afternoon waiting for Ruby to finish her drama class and I thought ‘what can I do?’”

Soon afterwards she got chatting to Gungahlin’s Corps Officer, Captain Dominic Wallis. A towering man with a giant heart, he explained to Natalie why there was a basket of good quality, donated toys near the front desk, and another basket with food items.

“When a parent comes in and they are in that desperate need for help and they are obviously so stressed, it’s nice for the kids to have a bit of a distraction and be able to take a toy home and have a bag of cookies or something,” Natalie said. So, she and her kids began to bring along donations each week as a way of blessing their community through The Salvation Army.

Later in the term, and heading towards Christmas, Natalie found herself at the Salvos yet again, waiting for the drama class to finish. Her mind again wandered to the people in her community who didn’t have the financial security that she enjoyed, and her heart broke for them. She asked Dominic what happened at Christmas time at the Salvos, and was amazed that they helped around 80 families with new toys and food hampers. 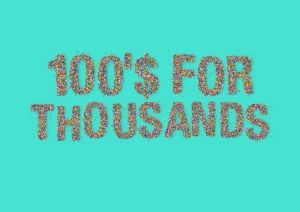 Her mind began racing. How could she assist? The next week, she and the kids donated a car-boot full of new toys. But what else?

“I thought I could try to raise money to buy grocery gift cards to give to the families,” she said. “I thought, ‘$100 for 100 families’, it sounded good, it had a nice ring to it!

“I went home that night and I just decided to put out a post on my own Facebook page and just say, ‘This is what I’m doing.’ But there was one moment where I stopped and thought, ‘Oh gosh, that’s 10,000 dollars that you’re trying to raise, how are you going to do that in three weeks?’”

But she did. In fact, through her friends and family connections, Natalie raised $16,000 which not only gave each family assisted at Christmas time a $100 grocery voucher on top of their toys and food hamper, it allowed the corps to buy extra gift cards to assist families in January and early February, when the need spikes with back-to-school expenses.

An extremely thankful Dominic said, “It was a huge blessing because she was able to step in and help us to focus on what we do best, which is the community assistance, and she was able to raise the resources for us to do it. It increased what we were able to give to people in need, so really, the community benefitted the most.

“The people who get the assistance are really grateful and hopefully what we’ve given brings a bit more joy to their Christmas than they would’ve normally had,” said Dominic.

Fast forward to the start of the Christmas season 2020 and Natalie is very aware of the additional needs faced by families due to the economic downturn caused by COVID-19. She’s determined to continue playing her part in The Salvation Army’s mission and has launched ‘Hundreds for Thousands’, an ambitious fundraising drive aiming to raise $100,000 to bless 1,000 families throughout Canberra and its surrounding towns of Yass, Cooma, Queanbeyan and Goulburn.

“There are 10 Salvation Army centres in total, so each centre has a goal to raise $10,000 to bless 100 families,” she said. Her fundraising will continue to be connected with Gungahlin Salvation Army, and she has been hard at work spreading the news, organising free radio advertising and stories in the local newspaper to get the word out.

“She’s passionate, she’s very determined and generous with her time and her talents. Just using her networks to be able to make a difference. She sees and wants to meet the need,” said Dominic. “She allows people to feel like they’re part of something greater.”

And while  Natalie doesn’t attend The Salvation Army corps or have any other involvement, she says there’s something about the Salvos that has always pulled at her heartstrings.

“I would always see the Salvos man sitting at the Canberra centre collecting money. It was Alan (Jessop) … I would stop and have a chat to him and always donate. Whenever I see him or any Salvos in any of the centres, I just have this thing where I cannot go past without donating.

The connection is now firmly entrenched, with Natalie an integral part of bringing Christmas Cheer to her community through The Salvation Army. What a blessing!