Bottles of blessing can change lives Bottles of blessing can change lives

People can choose to donate their bottle recycling refund back to The Salvation Army as part of the ‘Bottles for Change’ initiative that was launched in August 2020.

The Salvation Army has been chosen as one of three major charities to benefit from a container recycling initiative operated by the governments of New South Wales, Queensland and Western Australia.

Titled ‘Return and Earn’ in NSW and ‘Containers for Change’ in Queensland and Western Australia, the scheme allows people to recycle their empty drink containers in exchange for a 10-cent refund. Under the partnership, they are then asked if they would like to donate the payment to a nominated charity. 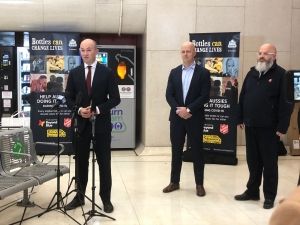 In late August, it was announced that The Salvation Army, Beyond Blue and Oz Harvest would be the beneficiaries of the latest round of fundraising from the initiative.

“Today I’m very excited to announce our Bottles Can Change Lives campaign,” said NSW Environment Minister Matt Kean at the launch, held at The Salvation Army Sydney Congress Hall Corps in Sydney. “People can support this important initiative by going to your local return-and-earn machine. These machines are spread throughout NSW so we’re encouraging people, to get down using one of the vending machines, choose the charity of your choice.”

Ryan Buzzell, President of TOMRA, the company that invented ‘reverse vending machines’ that are used for the bottle recycling scheme, said the aim was to hit an ambitious fundraising target. “We are going to raise $1 million for those who need it most during this terrible pandemic.”

In response, Captain Matt Reeve, Sydney Congress Hall Corps Officer, said the goal is for the donated money to go straight back into the community. “There’s an ambitious plan by TOMRA and the state government to help people who face hardship and The Salvation Army is delighted to be able to partner in this ambitious plan to see people’s lives transformed.”