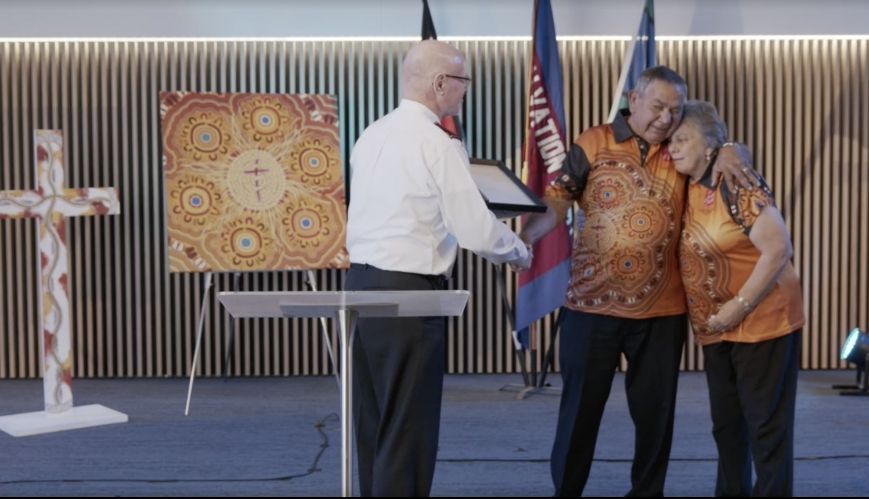 Territorial Commander Commissioner Robert Donaldson awards Uncle Vince Ross with the Order of the Founder alongside his wife, Aunty Enid Ross, in an emotional presentation that was live-streamed to The Salvation Army as part of the launch of the National Reconciliation Action Plan.

Uncle Vince Ross, a key Australian Salvation Army Indigenous leader, has been awarded the Army’s highest honour – the Order of the Founder.

The surprise presentation took place in Melbourne at the launch of the Australia Territory Reconciliation Action Plan, which Vince has been assisting the Army to work towards for many years.

An emotional Commissioner Robert Donaldson, Territorial Commander, asked Uncle Vince and his wife Aunty Enid Ross onto the platform to present the award, saying, “The General has awarded you the Order of the Founder with the following citation: ‘For outstanding commitment to reconciliation between Aboriginal and Torres Strait Islander peoples and non-Indigenous Australians, both within The Salvation Army and in Australian society in general. For promoting the importance of reconciliation and understanding the lifestyle, culture, history and spirituality of the Aboriginal people.’”

Uncle Vince’s current role with The Salvation Army is Convenor of the Aboriginal and Torres Strait Islander Advisory Group. 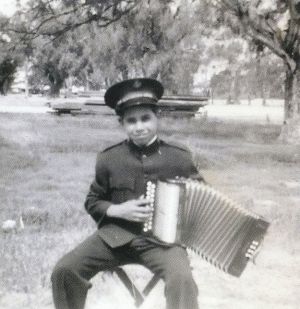 Uncle Vince was born at Balranald, on the Murrumbidgee River in southern New South Wales, then lived in Deniliquin for a number of years. He encountered The Salvation Army as a boy when he was living on a reserve on the dry river-bed at Deniliquin. He remembers Salvationists coming to the reserve with “hammers and nails” and helping to “build little shelters and things like that for the people on the riverbank”.

“They shared and cared for the people there and that was a tremendous thing for me because I actually witnessed, I think, in a sense, Jesus walking amongst us on that reserve through the ministry of the people,” he said.

Uncle Vince became a Salvationist at the age of 12 and was a bandmaster at the age of 17. He often jokes that he has served in every Salvation Army local officer position except as Home League secretary!

Over the years, he has served on a number of Salvation Army advisory boards, and has worked tirelessly with the organisation towards reconciliation. In 2016, at a Salvation Army Festival of Mission, he spoke of the many obstacles on the path to reconciliation but thanked God for the signs of hope: “We need to find the right language to communicate. What are the practical things we can do to break down the barriers and create community?”

He said when he was called to the platform and realised he was receiving the Order of the Founder, he was in shock: “All the work I’ve been involved with over the years, it’s not about whether you get a prize or whether you get some acknowledgement,” he said.

“But that [the award] just about blew me over, I’ve gotta tell ya! I’m thankful for that and for that recognition that The Salvation Army has placed on us, and I’ll certainly value and treasure that. I don’t think it will change Vince Ross, but I think it’s something that I can reflect on and say, ‘It’s all been worthwhile; all those years’”.

He said he’s thrilled to see how far The Salvation Army has come on its journey to reconciliation.

“What I like to do is I try to invite people to journey with us in reconciliation, in building strong relationships and bridges in the community.

“When we come and spend time together, I think that’s the important thing. I don’t think it’s about trying to change all the difficult things in life but relationships is a very foundational thing that we ought to be involved in. I thank The Salvation Army for its work in that area and for bigger and better things that I think will be happening in the future.”