Deck the walls: Cairns Corps has hired a double-decker bus for its Christmas carolling this Advent season, decorated it and put large banners on the side so there is no mistaking The Salvation Army is in the neighbourhood.

Brass bands from The Salvation Army across Australia and the world traditionally have spent the Advent season on the streets playing Christmas carols in a variety of settings.

From shopping-centre malls to city streets, on foot to the back of trucks, the community is reminded of the birth of Jesus through music in a myriad of ways.

Major Ben Johnson, Corps Officer at Cairns in Far North Queensland, said his congregation had stared down COVID-19 restrictions and reimagined its usual carolling efforts and were doing “something a little bit quirky” – carolling from the top deck of a double-decker bus.” 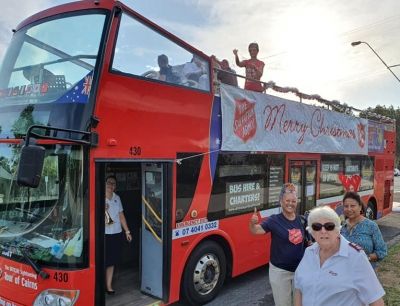 Ben said the “big, red party bus” was usually a mobile nightclub but had been transformed into a mobile Army centre to criss-cross Cairns streets on Monday evenings during December with corps members playing and singing carols and Christmas songs. He said it was the corps’ way of “thanking our community for all their support in these tough times”.

The Cairns Party Bus, which does not have a roof, has not been seen on the streets much throughout 2020 as COVID-19 social-distancing restrictions had reduced to almost zero the number of events for which it could be hired.

After a year of upheaval, Ben said that “people just need something to celebrate” and going into the streets and playing carols in front of someone’s house “has the ability to really just change people’s mindset”. 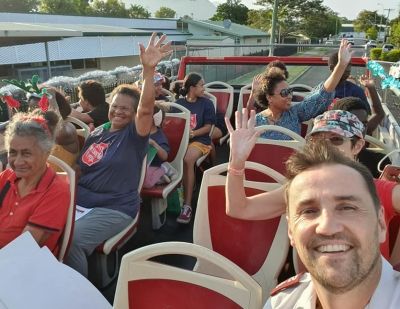 Along with the brass ensemble, a choir had rehearsed for several weeks to be part of the outreach. As the bus drives along, young people from the corps hold up the lettering for the word ‘HOPE’ (with the red shield as the letter ‘O’). “It’s a really symbolic thing,” Ben said.

Ben said the bus is about for about 90 minutes. “The bus driver who owns the bus asked if he could bring his wife next week as he loved it so much,” Ben said after the first evening.

The corps also had made up 300 food hampers and 450 gift hampers to give out in the lead-up to Christmas.

Ben said that while being “quirky” and “a little bit audacious” the aim of hiring out the bus was to be “visible”, to remind people about the meaning of Christmas and to raise the profile of the Army in Cairns.

He said Salvation Army co-founder William Booth set the tone in the early days of the Army when he took secular music, methods and ideas and gave them a kingdom purpose – and that is what Cairns Corps had done by taking what principally was known as a mobile night club and put it to use to aid local mission delivery.