'Big wet' arrives in Mount Isa ... in the corps building 'Big wet' arrives in Mount Isa ... in the corps building

Water is swept out of the worship centre at Mount Isa Corps after a water main burst in the street and sent water gushing through the building.

A burst water main in the street last weekend threatened to derail Christmas for Mount Isa Corps in western Queensland, but quick-thinking firies saved the day.

Corps Officer Captain Natalie Steele said the main burst about 4pm on Saturday and members of the Mount Isa Fire and Rescue Station across the street from the corps raised the alarm after having noticed the water rushing into the building.

Natalie said Mount Isa City Council workmen were on the scene quickly to shut off the water and their fast repair work kept the damage to a minimum.

About 10cm of water flowed through the main worship centre, youth space, kitchenette and creche room as the water gushed onto the property. Chairs and other furniture were put up on the raised platform area out of harm’s way. 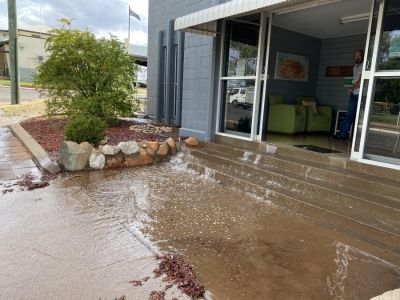 Water cascades down the front steps of the worship centre at Mount Isa Corps.

Natalie said that due to the help from the firies, council workers, corps folk and a member of the corps who ran a steam cleaning business, there was no disruption to scheduled events including worship the next day which was held in the youth space.

The corps officers and members of the congregation swept as much of the water out of the building as they could on the day before the remaining water was vacuumed away. Evaporative air-conditioning, fans and other drying equipment did the rest over the next few days.

As the buildings virtually were back to normal within days of the incident, the final Crossroads meeting for the year tonight and the two-day Christmas toy collection at the weekend are able to go ahead as planned.

Natalie said people who had not known of the inundation would not immediately notice any evidence that it had occurred: “No one else would notice unless they knew what to look for,” she said.

She said it could have been much worse if the water flow was not noticed when it was as there was only slight water damage to some furniture and the carpet was tiled squares on a concrete base.

“It was clean water, thankfully,” Natalie said, although the water washed inside “a fair bit” of soil and woodchips from the garden.

With the crisis averted, the corps is looking to have its final Christmas service on Sunday 20 December, as there is to be no Christmas Day service this year.