Indigenous boys lining up to lead the way Indigenous boys lining up to lead the way

The Leadership and Resilience Program in Townsville works with young Indigenous men to help them understand cultural identity and build resilience for the future.

After having to cancel programs in 2020 due to travel restrictions and COVID-19 risks, The Salvation Army’s successful ‘Leadership and Resilience Program’ for Indigenous boys, based in Townsville, is ready to restart in 2021.

Connecting more deeply with culture is one of four key focus areas for the program, which began in 2015 in the North Queensland city and has been run every year since.

The program also works to build leadership and resilience in the areas of health and wellbeing, relationships, education and employability for Indigenous boys aged 14-15 years.

“Our hope is to see kids complete school and become employable,” says Terrence Whyte, Aboriginal and Torres Strait Islander Coordinator and Youth Specialist. “We are [also] working to do our part to close the gap.

“When we engage with the young boys, we also engage with their family and connect them to Elders and services in the community. This type of networking can build resilience [too].” 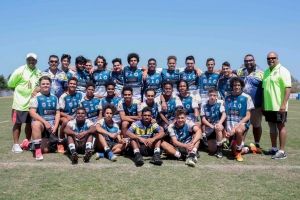 Rugby League is used as an engagement tool in the Leadership and Resilience Program in Townsville.

As well as using rugby league as an engagement tool, cultural aspects of the program include yarning with cultural and community Elders, dancing, a smoking ceremony and promoting cultural safety.

To date, the program has been highly successful with only five out of 125 participants not completing school and many going on to jobs and even leadership roles.

“Because they have to show 90 per cent school attendance while engaged in our program, I’ve seen students pick up their attendance rate from 40 per cent,” says Terrence.

Rugby league was initially seen as the ‘hook’ to engage the teenage boys, and eight program participants have since been offered school scholarships for a Brisbane-based rugby league school. Others have gone on to represent the Queensland Murri team.

“The other thing we didn’t anticipate, but we have seen the benefit of, is these young fellas also engage in prayer each time they take the field and when we’re having meals. We have had a couple strong in faith and they take it upon themselves to lead in prayer.”

Peer learning is an important part of the program and Terrence says it also impacts many more than the 25 chosen participants each year, with a wide flow-on into families and the wider school community. It has also become a program many younger students aspire to join.

“When we first engaged with the first 25, the feedback was ‘we went away as friends, we returned as brothers’. They all came back to their community, spoke to their peers, their brothers, cousins, friends, about their experiences.

“What we have seen, as a bonus, is that as the younger ones are preparing themselves to apply for the program [they increase their school attendance]. They don’t realise they have already started their own leadership and resilience journey, whether they then take part in the program or not.”