Serving people at their point of need 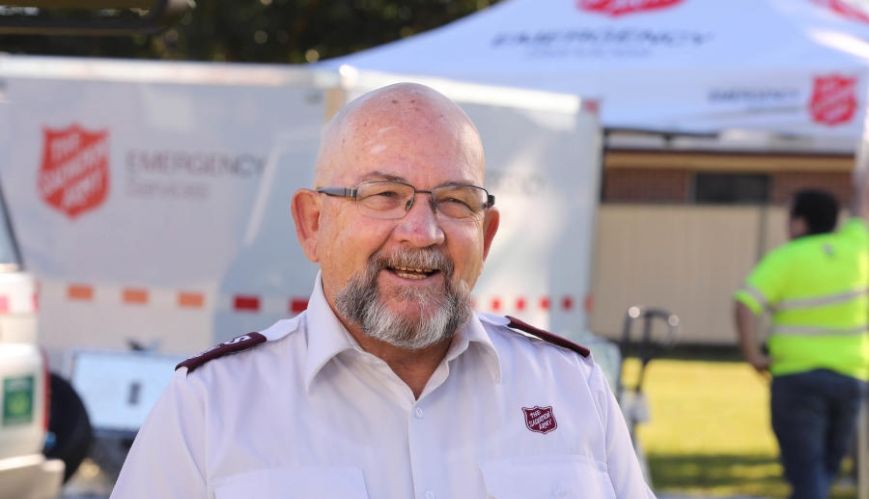 Serving people at their point of need

As General Manager of The Salvation Army Strategic and Disaster Management unit, Major Topher Holland oversaw the widespread response to the 2019-20 Black Summer bushfires that covered more than 290 locations at evacuation centres and firegrounds during the disaster.

Reflecting on that intense season, Topher says the response to the ever-changing situation had to be incredibly fast due to the speed at which the bushfires were moving.

“Our initial response was to assist people who had been through an incredibly traumatic event – an ongoing event – and a part of that was in our evacuation centres and our serving the combat agencies,” he said.

“The saying that we always use is that we meet people at their point of need. That need changes as time goes on. So, initially, it’s food, shelter, clothing, and then it’s ‘Right, what do I do from here – has my house burnt down? What’s actually happening here? And what is the support I need now to move forward?’ So, there’s always ongoing care.” Major Topher Holland gets an update from a volunteer during last summer’s bushfires.

With years of experience working in disaster management, Topher understands that, for many people, it takes time to be ready to rebuild – not just their homes, but also their lives.

“The Salvation Army makes the statement, ‘We’re there for the long haul’ but we don’t want that to mean that we hold back resources. We want to do the journey with people. So, we meet people at that point of need and, moving forward, that need changes as people go through that recovery and rebuild.

“In a sense, it’s highlighted in Psalm 40:1-3 – where there’s this great need we come alongside and help people, we lift them up, we set their feet on solid ground and then we do the journey with them on their recovery and rebuild their lives. Some people aren’t going to recover, so their lives have to be rebuilt around a new normal.”

The sheer scale of last season’s bushfires has been described by many as ‘unprecedented’, and so was the response by The Salvation Army Emergency Services (SAES) and recovery teams. As blazes moved across the affected states, activated teams would relocate to cater to first responders, while recovery teams set up in towns where the fires had passed through.

With the situation shifting and developing constantly, large-scale and simultaneous response and recovery coordination was required to tend to the changing needs of communities. Topher says the first response in a disaster is always about basic needs – food, shelter, clothing and emotional care.

Once that is covered, the team starts thinking about what the need is going to be moving forward and how they can help. With multiple agencies, government and privacy issues involved, there is much to consider.

With many people impacted by multiple disasters, that variety of need was immense. Dedicated Salvation Army rural chaplains had already been providing support to drought-stricken communities – only to see the same community ravaged by fire and then flood.

The financial assistance provided has been a lifeline, but so has the human connection of an encouraging phone call or visit offering emotional, psychological and spiritual support.

“One of the blessings of The Salvation Army is that whilst we’re nationally focused, we are embedded locally,” says Topher. “Our connections and referrals to all our ministries is an amazing thing we have that no one else has.”

A heart to help

While Topher is moving on from his role, he says the highlight for him has been working in a team of people who are committed to serving others.

“They have a heart for people. A heart to serve. A heart to provide effective and efficient assistance to people following such a serious and disturbing event. They’ve punched above their weight really and they’ve got a strength about them that really wants to support each other but also support people in the local community.”

The NSW Government has since recognised members of The Salvation Army, SAES volunteers and volunteers from other non-government organisations across the state for the significant contribution they provided during the bushfire crisis.

“It is really important to me – and I encourage my team – that we want people to understand this, ‘there’s no pit so deep that love can’t reach you and hope can’t help you,’” says Topher. “We get people to understand that’s what we try and do; we want to say in this time of despair and this time of incredible challenge and difficulty and trauma that that pit, that challenge you’re in, The Salvation Army wants to come alongside and give love, give hope.”

Topher and his wife Major San Holland will be taking up new appointments this month as Area Officers for ACT and the NSW South Coast. He is also developing a national critical incident peer support team for the care of Salvation Army people.

“From time to time, people can be subjected to a crisis, an emergency or a disaster or a stressful incident, which is sudden, unexpected and overwhelming. The reaction to such an event is what we call ‘critical incident stress’. We want to help where people are exposed to such an incident that would place great strain on their capabilities of coping. My heart is to see people come from this place of despair to a place of recovery and hope.”