The Salvation Army in Cape Town has moved quickly sorting through mountains of items to form into relief packs containing food, clothing, household goods and hygiene items, including soap, toothbrushes and toothpaste, to be sent to needy families in Masiphumelele township after a major fire made about instantly 5000 homeless.

The Salvation Army in South Africa is providing relief supplies to hundreds of families whose homes were razed in a major fire in Masiphumelele township, on the Cape Peninsula south of Cape Town. 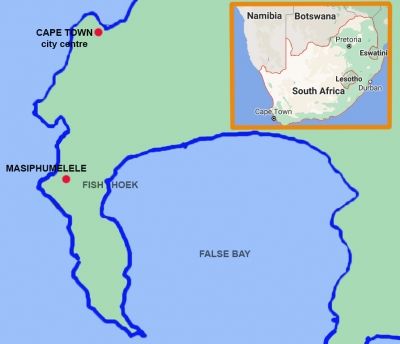 The fire, which burned for several hours, started just before Christmas and forced more than 5000 people out of their homes.

Lieut-Colonel Mercy Mahlangu, the Army’s Divisional Director of Women’s Ministries for the Western Cape, said homes were burnt to the ground, which meant some families lost everything.

The housing in Masiphumelele, which is in the Fish Hoek area about 20km from the Cape Town city centre, is largely informally constructed, densely packed and poorly resourced with amenities.

The Unequal Scenes website says fires in Masiphumelele are common in winter, sometimes displacing residents by the hundreds.

Working closely with Cape Town authorities and other local non-governmental organisations, the Army identified the people at greatest need of help and provided emergency food relief, hygiene packs and kits of household equipment to replace what was lost in the fire. Mercy said that, despite the devastation and need, the fire had brought Masiphumelele community closer together. About 40,000 people live in the township.

Army teams working with colleagues from the Living Hope organisation in the township have distributed bucket food hampers as well as nutritious ready-to-eat meals.

Plastic basins, cooking pots and two-plate stoves have been provided to 350 families, with a similar number receiving hygiene packs including hand soap, face cloths and dental care items such as a toothbrush and toothpaste.

Mercy said continued support would be required by families living in temporary shelters while a decision is made on rebuilding homes.

Mindful that Masiphumelele is a Xhosa language word meaning “let us succeed”, the Army was keen to work with the community to help it achieve that outcome.

* Written from reports from Southern Africa Territory and IHQ Communications