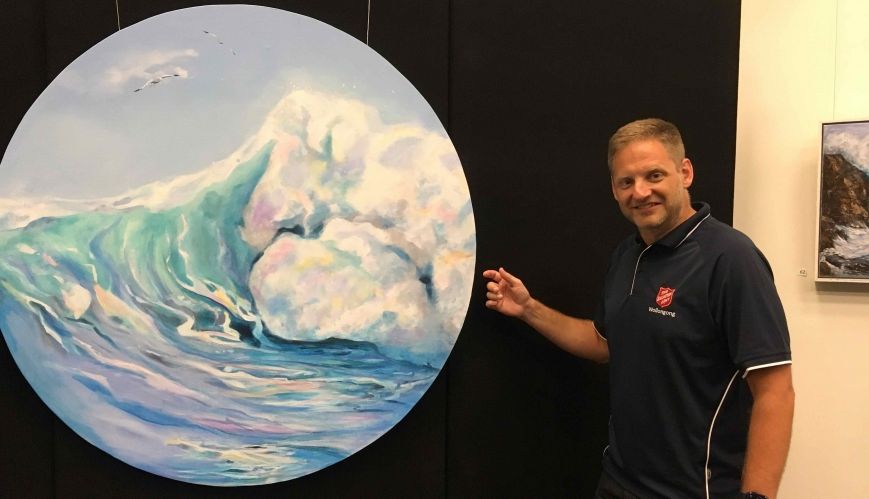 Major Phil Inglis, Wollongong Corps Officer, admires one of the winning entries at the Jayne Wilson Memorial Arts Competition and Exhibition at Wollongong Corps. The painting, by Sandra (SAS) Gray is entitled ‘The Power of the Wave’, reflecting the exhibition theme of ‘Strength’.

The theme of ‘Strength’ is on full display at the seventh annual Jayne Wilson Memorial Arts Competition and Exhibition at The Salvation Army centre in Wollongong.

The exhibition is the largest of its kind in the Australia Territory, honouring the legacy of Jayne Wilson who established the First Floor Program in the NSW city in 1996. 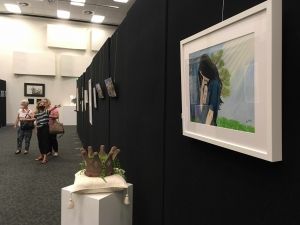 A group of people enjoying the exhibition at Wollongong Salvation Army.

The Jesus-centred program is a holistic and family-inclusive counselling and support service for those impacted by alcohol and drug misuse, mental health issues, trauma, grief and loss. Jayne, who passed away on Christmas Day 2013, often used artwork activities in the support and counselling groups she ran, and was an artist herself.

The exhibition this year received about 70 entries, ranging from paintings and drawings to sculptures and photographic work. A different theme is chosen each year, and anyone is invited to submit a creation reflecting that theme.

The winners of the Wilson Family Awards for works best representing Jayne’s personality, life and legacy, and the 2020 theme of ‘Strength’, were announced at the opening. 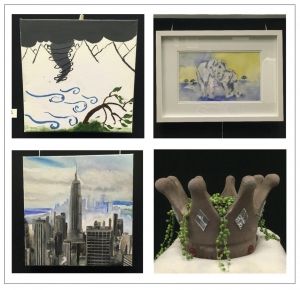 A selection of entries in the exhibition including winning entries at top left and bottom left.

The winners in each category were:

Youth: George Williams for the work ‘Eye of New York’

Open: Sandra (SAS) Gray for the work ‘Power of the Wave’

Spirit Award: Robin Bubb for the work ‘Life has More Strength than Death'

The exhibition is running for 10 days until 1 February and is open for viewing (with a mask) from 10am-3pm each day at 11-13 Burelli Street, Wollongong.

Program on the move

Meantime, the First Floor Program has moved most of its operations to Port Kembla, in the southern suburbs of Wollongong, taking over the former Salvation Army ‘Foundry Café’ in Wentworth Street.

“The ‘Foundry Family Centre’ has been operating four days a week since last August, offering counselling and support programs with a focus on mental health and resourcing families,” said program coordinator Marilyn Dunn.

Various community programs are now affiliated with the centre, including the Fathering Project (which aims to inspire and equip fathers and father-figures to positively engage with the children in their lives – for the benefit of kids); Hidden Harvest (a not-for-profit initiative that raises awareness about food waste and its related environmental and social problems) and Salvos Stores (which supplies the centre with toys, books, clothing etc for purchasing). A lessee is also operating the café.

The Foundry Family Centre was successful in obtaining a Salvation Army Innovation Grant and has put that towards renovations. The Port Kembla Investment Fund also contributed to the renovations, particularly a training room.