Salvos set up for support as bushfires rage east of Perth Salvos set up for support as bushfires rage east of Perth

Western Australia Salvation Army Emergency Services teams are set up for the long haul, supporting firefighters as they work to get bushfires east of Perth under control.

By Holly Reed and Lauren Martin

The Salvation Army in Western Australia is assisting people impacted by bushfires that continue to threaten homes, businesses and livestock in the hills east of Perth.

Salvation Army Emergency Services (SAES) and Disaster Management teams are on the ground, providing care and support to those in need, with approximately 4000 meals served to firefighters and emergency personnel per day in this incident alone. It comes as teams also assist at police COVID-19 roadblocks during the state’s hard lockdown, which was announced on Sunday.

By 3.30pm today, 71 homes were known to have been destroyed by the blaze, which started in Wooroloo on Monday. Hundreds of people spent last night in evacuation centres and an emergency warning remains in place as the bushfire continues to threaten lives and homes.

“A huge shout-out to our volunteers who have, over the last two months, individually given us a very special gift of their time, energy and commitment of supporting our courageous first responders,” said Warren Palmer, The Salvation Army Western Australia Public Relations Secretary. “Over the last two months, there has practically only been about three or four days where there has not been an incident we have not been responding to.”

More than 400 people have so far sheltered at an evacuation centre at Swan View. Teams of Salvationists and officers from Swan View and Morley corps have been on hand to provide emotional support and practical assistance at the site. 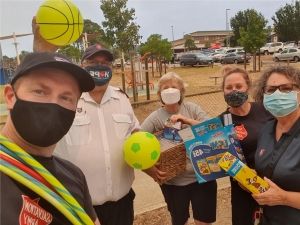 “We just went around and handed out bottles of water and had conversations with families across the evacuation centre,” said Morley Corps Officer Captain Pete Brookshaw. “Many of them had only had one hour’s sleep or so, had been told to evacuate their homes at two in the morning and so there were many families just really tired and anxious.”

Morley children’s and youth ministry workers also visited the evacuation centre with toys, colouring books and games, engaging children in activities and a game of soccer.

Pete said that with the recent COVID-19 lockdown on top of the bushfire threat, there is a general sense of anxiety among members of the Perth community right now. “This is a chance for us as a Salvation Army to speak into that and bring hope in the midst of crisis,” he said.

The Salvation Army Strategic Emergency and Disaster Management team will continue to work with the Department of Communities, which is leading the response to determine over coming days what further support is required. Warren said that no matter what happens, The Salvation Army’s focus will be on strengthening communities and coming alongside people in their time of need.

“There is so much we don’t know around where this fire is going to end,” he said. “What we do know is that our community is our greatest concern right at this time. Their wellbeing and their ability to be able to cope with the circumstances they are being presented with ... is really on our heart, and we want to continue to do what we can to support their recovery.”