The group that took part in the historic yarning circles between The Salvation Army and elders from the Cherbourg Aboriginal Community Settlement.

The Salvation Army Regional Ministry Team, which is sub-group of the Area Leadership Team (ALT) for South-West Queensland, has been part of the first of a series of historic meetings with elders at the Cherbourg Aboriginal Community Settlement in the South Burnett district north-west of Brisbane.

Not since the mid-1900s has the Army set foot on the settlement it began 120 years ago in such an official, strategic and intentional manner.

Major Deon Oliver, who heads the South-West Queensland ALT, said in recent years, through the Army’s Indigenous Ministries stream, there had been Christmas distributions at Cherbourg and he had visited the settlement when he was first appointed to his role.

Deon said this regional ministry team, with an emphasis on Indigenous Ministries, was formed in response to the South Burnett Corps Local Mission Plan with an “intentional re-commencement of yarning” at the settlement.

South Burnett Corps Officer Captain Tim Brown said the new series of meetings – or yarning circles – was designed to begin a “journey of truth-telling” between the Army and the people living at the settlement about the history of the settlement and the Army’s involvement in its beginnings. Deon said three more meetings were planned for this year.

He said the view of the Queensland divisional leadership was that the re-engagement was “an opportunity to invest financial and people resources as a demonstration of the division’s commitment to truth-telling and thereby facilitating individual and community restoration”.

Tim said the yarning circles recognised many of the issues of the past and the ongoing impact that was having on many Aboriginal and Torres Strait Islander people, particularly those living at Cherbourg. 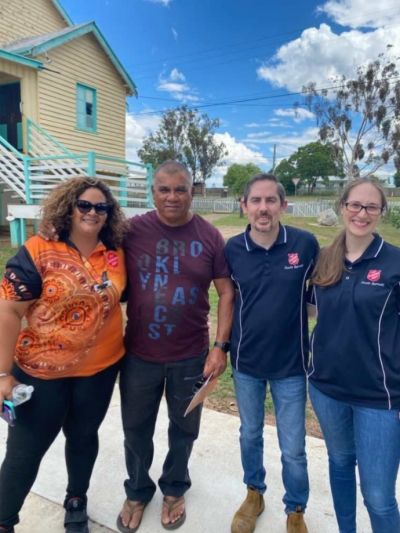 History records that the Army had negotiated with the Queensland Government in 1899 to establish an Aboriginal mission on 1280 acres of land at Barambah (in Wakka Wakka people country), which was gazetted as an Aboriginal reserve in March 1900. It was known then as the Barambah Aboriginal Settlement and operated under the Aborigines Protection Act of 1897.

First Nations people were drawn from across Queensland and northern New South Wales to live there. It was initially sponsored by the Ipswich Aboriginal Protection Society.

Tim acknowledged that the mission was not run well in the beginning. Conditions and facilities were poor and the people treated poorly.

The Army ran it for about five years, having moved to a larger site in the early years, before the state government took over management. In 1986, the Cherbourg began managing its own affairs under a Deed of Grant in Trust.

“The Salvation Army is committed to continuing an ongoing journey of truth-telling in our movement with the goal of healing, unity and seeking positive change,” Tim said. “We want to take the truth-telling journey slow enough to yarn and fast enough to keep moving together.”

He said that, along with truth-telling, there was a significant element of listening in the process.

“So often, we, with good intentions, enter into situations with the goal of bringing a solution. In this case, we want to support the community in identifying the challenges and work alongside as a silent partner to meet those challenges.”

During the meetings, Lucy presented the council with a copy of the Army’s first national Reconciliation Action Plan, which was launched late last year.

Tim said the meetings were an opportunity for the Army to acknowledge its role in the mission and the settlement of Cherbourg.

“This short trip to Cherbourg was just the beginning of something big,” Tim said. “The key outcome was to gain the support of council, elders and local groups so that we can begin this journey.”